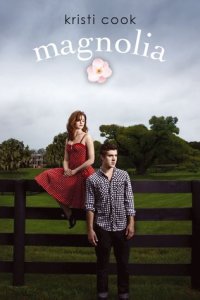 In Magnolia Branch, Mississippi, the Cafferty and Marsden families are southern royalty. Neighbors since the Civil War, the families have shared vacations, holidays, backyard barbecues, and the overwhelming desire to unite their two clans by marriage. So when a baby boy and girl were born to the families at the same time, the perfect opportunity seemed to have finally arrived.

Jemma Cafferty and Ryder Marsden have no intention of giving in to their parents’ wishes. They’re only seventeen, for goodness’ sake, not to mention that one little problem: They hate each other! Jemma can’t stand Ryder’s nauseating golden-boy persona, and Ryder would like nothing better than to pretend stubborn Jemma doesn’t exist.

But when a violent storm ravages Magnolia Branch, it unearths Jemma’s and Ryder’s true feelings for each other as the two discover that the line between love and hate may be thin enough to risk crossing over.

Magnolia was an impulse read. And I’m definitely glad that I did.

From the looks of it, it could just be some simple story of two people who grew up not wanting to be together at all. Honestly? That statement would be just touching the surface.

Jemma wasn’t a bad protagonist, but she wasn’t outstanding in any way. However, her loyalty to family and her quick wit in dealing with a storm was admirable. Ryder was also someone I couldn’t quite decide on at first. Maybe it was because Jemma held such a bias towards him and it was hard to judge his character through her lenses.

I absolutely loved the feeling of the old South that touched this book so heavily. I’ve never been down there but I would like to imagine that it would feel something like the way this book made me feel. As the author was a native to the area, I can only assume that it would be quite accurate. The setting made it an even more enjoyable experience as not a lot of books in YA literature picks such a rural location, and does it justice.

The attraction and romance was made more delicious with the huge storm that trapped Ryder and Jemma together for the first time in ages. Just think about it. The two of them huddled in some storm cellar, which by the way isn’t all that large, enclosed in darkness as loud winds and roaring rain comes down from above. Sounds kind of cozy, like the two of them are in their own world where they are each others’ haven. There was even one amazingly steamy scene that was totally swoon-worthy…if you’re into that.

Anyway, Magnolia has proved to me that beautiful stories could be made from the tiniest of moments. Action and heavily packed plots don’t have to be necessary components that make up a tale of two people falling for each other.

And by the way, that ending was kind of genius. Just saying. For a flipped inside out Romeo-Juliet-esque type of story, that was one smart move to make. Kind of makes me wish there was a second book to see how the two fare once they hit college.

Overall Recommendation:
Set in the beautiful Old South, Magnolia is a surprising story from a not as well known author in YA literature. Steeped with a simmering attraction underlying the two protagonists’ animosity towards each other, it was a fun journey to see how a storm and a little together-time allowed them to see that the boundaries between love and hate may be quite thin. Both are rather strong emotions, after all, right? A definite recommendation. It was hard to put down, and sleep was worth the sacrifice to finish.