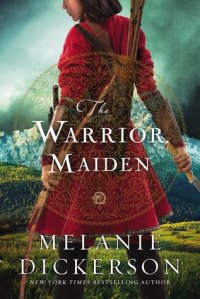 Mulan isn’t afraid to pretend to be a son and assume her father’s soldier duties in war. But what happens when the handsome son of a duke discovers her secret?

Mulan is trying to resign herself to marrying the village butcher for the good of her family, but her adventurous spirit just can’t stand the thought. At the last minute, she pretends to be the son her father never had, assumes his duties as a soldier, and rides off to join the fight to protect the castle of her liege lord’s ally from the besieging Teutonic Knights.

Wolfgang and his brother Steffan leave Hagenheim with several other soldiers to help their father’s ally in Poland. When they arrive, Wolfgang is exasperated by the young soldier Mikolai who seems to either always be one step away from disaster . . . or showing Wolfgang up in embarrassing ways.

When Wolfgang discovers his former rival and reluctant friend Mikolai is actually a girl, he is determined to protect her. But battle is a dangerous place where anything can happen—and usually does.

When Mulan receives word that her mother has been accused of practicing witchcraft through her healing herbs and skills, Mulan’s only thought is of defending her. Will she be able to trust Wolfgang to help? Or will sacrificing her own life be the only way to save her mother?

The Warrior Maiden reminds me why I stopped reading Melanie’s books for a while. Sometimes Christian fiction elements just don’t mix well with your typical fairy tale retelling.

Don’t get me wrong. I’m not saying that it’s weird and strange to try. I loved some of the earlier Hagenheim books but I think there reaches a point where all the more popular fairy tales have been done and you’re left trying to weave just one more story out of a tale that should be left alone.

The story of Mulan fits that bill.

For medieval age Lithuania, I’m not sure this story fit well. For one, Melanie kept the protagonist’s name as Mulan. Sure, I like the authenticity and the allusion to the Chinese heritage (for which I’m extremely happy about ’cause we’ve all had enough of westerners changing an original Asian cast to a white version while fans keep their complaints quiet or their grumbles come to nothing), but it just seemed far fetched too me.

Then came the romance. The “prince”. Wolfgang. I didn’t feel it. It was love at first sight. She saw him when she joined the army to fight the Knights and like fell in love? Was it lust? I mean, she really liked how handsome he was and she felt something different about him. Some kind of stirring in her. Yes, she got to know him afterwards and her attraction grew, but it was so strong so fast and I just didn’t feel a thing.

If that wasn’t bad enough, the plot fell flat. At like half point, the “big” bad was kind of defeated and they were celebrating. I’m sitting there thinking, well what’s the next half of the book gonna be about if it’s almost happily ever after already? Of course, things “still” happen but I wouldn’t say that it was very exciting from that point since it seemed we hit our climax in some way already.

I really wanted to like this book. I like the story of Mulan. She’s a strong female character, not your typical princess, who still got an amazing happily ever after. There’s nothing wrong with princesses but sometimes you just want a warrior girl.

I think it’s amazing to try and combine fairy tales and Christian themes/morals but maybe it’s almost time to conclude this series. Kudos to Melanie for even attempting such a creative process but I don’t know if I can sit through another book where I felt nothing for anyone and the story just bores me to tears.

The Warrior Maiden tried to be a Mulan retelling that just fell flat from its ambitions. The story was slow and there was no real buildup to create anticipation and excitement. The storytelling and actual prose was too simple, making it hard to stay enthusiastic about anyone or anything that was happening. I wanted to love a Chinese girl in medieval age Lithuania but the story just didn’t work for me. Maybe this is goodbye to Hagenheim at last.

Hey everyone! I just wanted to also leave a post on this hopefully fabulous Christmas Day for you all. No matter where you are, I hope you find peace and love at this glorious time of year.

It has been a tumultuous year for me, and at times this blog was either a place of solace where I could just share some of the turmoil inside of me or a place that started feeling like it was more of an obligation than a choice to share my life and books with you all.

But through it all, I learned a whole lot. I learned to put more stock in my faith and trust that I’m getting to where I need to be, even when I can’t seem to see it (Prov 3:5-6).

I found someone amazing who makes me want to continually be a better person. Who challenges how I see myself and my world so that I may stand more firm in it.

And I have the support and love of a family I don’t deserve. Both by blood and by heart. I may have felt lost along the way at times, but I was never alone. This little elf always had God and people by her side, and for that, I’m always grateful.

So if you’re feeling down and alone right now on Christmas Day, I hope it’s a bit of encouragement to know that maybe we all just need to dig a little bit deeper to see who has always been there for us, even at our lowest points in life.

I want to wish you all a very merry Christmas and to hopefully an amazing new year to come!

Dana Newell has just moved to Rock Harbor to take a job as a sheriff’s dispatcher and is settling in next door to Bree and Kade Matthews. The abusive relationship she left behind seems a distant memory in this perfect place.

Her first day on the job, Dana receives a call from her friend Allyson who screams “He’s going to kill me too” before the phone goes dead. Dana immediately dispatches a deputy, but it’s too late. Allyson’s death is ruled an accident, but Dana just doesn’t believe it. She knows Allyson—an investigative reporter—was researching a new story. Did someone want to keep her quiet?

Dana continues to look into the accident with the help of Bree and also Allyson’s cousin Boone. Romance quickly blooms between Dana and Boone but the game is much more complex than either of them imagined. When Dana’s ex-fiance locates her, she’s caught in the middle. It’s a game of cat and mouse as she and Boone fight to catch one killer while evading another.

Ah, another mystery set in Rock Harbor. I will confess. I’m a huge fan of Colleen Coble and while that still remains true, I always found myself enjoying her historical fiction works a little more than her contemporary ones. Even still, I wanted to see how her latest story back by popular demand in the town of Rock Harbor would do.

And it didn’t necessarily disappoint (which is a win!).

Dana is an emergency hotline operator. That’s one tough job, but apparently the story trope of witnessing a tragic murder while on the line isn’t all that uncommon anymore. Nevertheless, Colleen Coble made this her own story.

As I was saying, Dana was a good protagonist. She was relatable, albeit not too memorable. She faced similar challenges as I do, trying to speak up when you’re afraid of rejection or being reprimanded by others. With the challenges she had to face due to the murder of her friend Allyson, it gets somewhat overlooked in the grand scheme of things, but she does grow a little in character. I think her character mostly shone through with the craziness that came from her ex chasing her around the country. I will get back to this later.

The romance was predictable. Boone has faced rejection from a previous relationship and didn’t want trust women, yada yada yada. But of course, Dana’s goodheartedness and inner beauty made him change his mind. Okay, it didn’t quite sound so simple, but it kinda felt that way. I wanted to believe in their blossoming love, but I felt it was all a little too cliched and it just didn’t hit me in a way that made me say “aha, my heart is hurting with them”. ‘Cause of course that’s the sign of true love in my eyes 😉

So maybe the romance wasn’t great with the typical strong male character wanting to save the girl who gets in trouble. But the mystery made up for it.

Except for the fact that I guessed who the unlikely culprit was before the halfway point. I was thinking to myself, “hmm, why do I get this crazy feeling it’s *insert name*? No, that can’t be right….”. And guess what?

But I’m sure most of you won’t see it coming (I blame it on reading too many mysteries growing up – and the amount of crime shows I binge watch). So that aspect should still be suspenseful and exciting for most readers. I enjoyed the way the pieces fell together. I was hoping it would be a little bit more creepy – like Colleen’s Abomination – but alas, it wasn’t quite as psychologically twisted as I initially thought it would be.

Other little things made the book better. Appearances by fan favourites Kade and Bree put them in roles – particularly Bree – beyond cameos in this story, and the familiar feeling of being back in Rock Harbor was pleasant. The plot was a little all over the place following different POVs, such as the killer’s and Boone’s and Dana’s, but it wasn’t to the level of chaotic so it felt like a good mix of omniscient narrative for us readers.

To sum it up, the romance wasn’t the best, but the mystery was still Colleen’s best. I liked being back in Rock Harbor, and I’m sure many more diehard fans than I am would really enjoy seeing familiar sights and characters. I may just be a bit picky (although I do love her historical mysteries!) but I believe this book falls in line with all the other works in this series and make for a good addition to fan favourites.

Overall Recommendation:
Beneath Copper Falls was a present to diehard Rock Harbor fans and I think Coble did a decent job with this new book. Witnessing the murder of her friend over the line, Dana was a relatable character who struggled with her own past relationship abuse while trying to figure out who killed her friends before the killer got to her. The budding new romance with Boone could’ve been better – he was a little cliched in personality and backstory – but that’s okay as the mystery more than made up for it. Mostly suspenseful (no matter if I predicted it a little early), this book is bound to satisfy some Rock Harbor fans and also make some new ones.

Know of any other good mysteries similar to this storyline?

And if you read this, do YOU think the culprit was predictable or not? I feel like I’m just an anomaly, but I could be wrong.

Next up: reviews on I See London, I See France by Sarah Mlynowski, and Flame in the Mist by Renee Ahdieh; and my June book haul ❤ Until then, lovelies.