From the author of The Best Laid Plans comes another fresh voiced, hilarious rom-com perfect for fans of Tweet Cute and The Rest of the Story.

As one of the most popular girls in school, she’s used to being invited to every party, is dating the Jordan Parker, and can’t wait to rule senior year with her best friend, Olivia. But when Penny wakes up on Jordan’s lawn the morning after his first-day-of-summer bash, she knows something went terribly wrong the night before.

Kai, her long-time nemesis. Kai, Olivia’s boyfriend. Penny can’t figure out what could have inspired her to do it–she loves Jordan and she would never hurt Olivia–but one thing’s for sure: freshly dumped, and out a best friend, the idyllic summer she pictured is over.

And despite the fact that Jordan seems to be seeking comfort (and a whole lot more) in Olivia, all Penny can think about is winning him back. Kai wants to save his relationship too, so they come up with a plan: convince their friends that they really do have feelings for each other. After all, no one can resist a good love story, and maybe seeing Penny and Kai together will make Jordan and Olivia change their minds.

But as summer heats up, so does Penny and Kai’s “relationship,” and Penny starts to question whether she’s truly faking it with Kai, if he’s really as terrible as she always thought he was, and if the life she’s fighting so hard to get back is the one she really wants.

In her second novel to date, Cameron Lund has shown me that her romances can do this girl no wrong. Hearbreakers and Fakers is the perfect combination of the fake dating trope PLUS enemies to lovers. After a night she can barely remember, Penny wakes up in the morning realizing she not only lost her boyfriend but also her best friend when she was caught drunkenly kissing her best friend’s boyfriend. Which happens to be her nemesis Kai Tanaka.

A reserved Bangladeshi teenager has twenty-eight days to make the biggest decision of her life after agreeing to fake date her school’s resident bad boy.
How do you make one month last a lifetime?

Karina Ahmed has a plan. Keep her head down, get through high school without a fuss, and follow her parents’ rules—even if it means sacrificing her dreams. When her parents go abroad to Bangladesh for four weeks, Karina expects some peace and quiet. Instead, one simple lie unravels everything.

Karina is my girlfriend.

Tutoring the school’s resident bad boy was already crossing a line. Pretending to date him? Out of the question. But Ace Clyde does everything right—he brings her coffee in the mornings, impresses her friends without trying, and even promises to buy her a dozen books (a week) if she goes along with his fake-dating facade. Though Karina agrees, she can’t help but start counting down the days until her parents come back.

T-minus twenty-eight days until everything returns to normal—but what if Karina no longer wants it to?

I will first say that I do not know too much about Bangladeshi people and culture except the stories I hear from a good friend of mine in grad school. What I do know is that with every culture, there are hardships and this resonated with me in so many ways. Counting Down with You was the emotional rollercoaster romance story centred around a protagonist I could root for and empathize with at the same time in her struggles to fight for herself. This own-voices story was everything I didn’t know I needed in 2021, and I am ecstatic to have found it.

Karina, nicknamed by her family as Myra, has just waved her parents off for a 1-month stay with relatives in their home country of Bangladesh. While they are gone, she finds the sudden freedom from the harsh restrictions her parents have placed on her with regards to school and social life. Normally, she had a curfew to be back from school – yes, not a night-out curfew but to come home directly from school unless she was in the Pre-Med Society meeting. Even tutoring was frowned upon unless it was for something related to STEM. So English, you can kiss that goodbye. As is already obvious, Karina struggled with the sciences and maths while English was her true passion. The premise of this story draws Karina into the path of bad-boy Ace whom she has to tutor in English at the request of her favourite teacher. 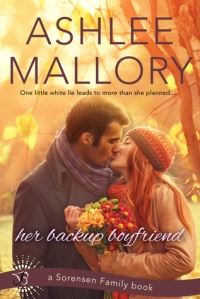 One little white lie leads to more than she planned…

Straight-laced lawyer Kate Matthews always plays by the rules. But when her ex gets engaged and a big promotion is on the line at work, she blurts out that she has a new boyfriend. And now that she’s proved she “has a life” outside of work, everything is perfect. Except for one teeny little detail—there is no boyfriend. And now Kate’s liable for her little white lie…

Dominic Sorensen is hot, charming, and very definitely not Kate’s type. But not only does Dominic want to help Kate renovate her home, he’s also willing to play “boyfriend.” All he wants in return is a little pro bono work for his sister. Now instead of Mr. Right, Kate has a delectable Mr. Fix-It-Right—and some unbelievable sexual chemistry. And if falling for Dominic is a breach of contract, Kate is guilty as charged…

I admit, the fake boyfriend trope fascinates me. It’s like, if you act it enough, you just start to believe in these feelings and situations. And I find it kind of cute that people can come to care for each other in this way.

In this story, Kate has suffered from watching her ex get engaged with someone else in her law firm. Struggling from heartache and also the pressures of becoming someone by making a junior partner in her work, she’s one stressed out character.

However, the plot isn’t all seriousness. It gets balanced out by the hilarious antics with her new Mr. Fix-It, Dominic, who also happens to be her neighbour’s nephew. Together, they hatch out a plan to get their families and work off their back about their love lives in order to get what they want.

But you know, as with these books, what they want eventually gets blurred and questioned.

It was a quick and easy read. I think what I loved the most was the Sorensen family. The Sunday dinners that were described really made me think about how family is very important, no matter our age. It shouldn’t be something that’s only done to pacify the parents. And Dominic being willing to bring Kate into that wonderful family dynamic showed her what she was missing from her childhood. Becoming someone important and “good enough” isn’t the most essential thing life.

All in all, it was a fun read and I got what I wanted from it, though it may not be as memorable.

Overall Recommendation:
Her Backup Boyfriend was a sweet and charming novel on the essentials of family and love. Kate is consumed with work, trying to be “good enough” in the eyes of her ex’s family as she’s not cut from the same rich cloth. Meanwhile, she meets someone who challenges those wants, who puts family first. Seeing the loving Sorensen family welcome her into their group made her question what she truly wanted in life. It was a nice read and perfect for a quiet summer afternoon.