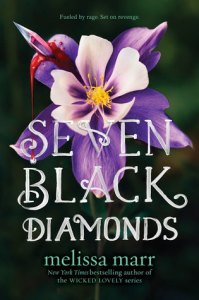 Lilywhite Abernathy is a criminal. Her father’s “unconventional” business has meant a life of tightly held secrets, concealed weaponry, and a strict code. But Lily’s crime isn’t being the daughter of a powerful mob boss. Her guilt lies in the other half of her DNA—the part that can coax ancient rumors from stones and summon fire with a thought. Lily is part fae, which is a crime in her world.

From the time before she was born, a war has been raging between humanity and fae. The Queen of Blood and Rage, ruler of both the Seelie and Unseelie courts, wants to avenge the tragic death of her heir—a death that was the fault of reckless humans.

Lily’s father has shielded her from the repercussions of her ancestry…until she is sent to the prestigious St. Columba’s school, straight into the arms of the Black Diamonds.

Mysterious, glamorous, and bound together in their mission but constantly at odds, Zephyr, Creed, Will, Roan, Violet, and Alkamy are a Sleeper cell of fae, planted in the human world to help destroy it from within. With covers as rock stars and celebrity children, the Black Diamonds carry out the queen’s war against humanity. And unbeknownst to Lilywhite, she’s been chosen to join them.

Now more than ever, Lily’s heritage puts her in peril, and even the romantic attention of the fae singer Creed Morrison isn’t enough to keep Lily from wanting to run back to the safer world of organized crime.

Melissa Marr returns to faery in a dramatic story of the precarious space between two worlds and the people who must thrive there.

Sigh. I haven’t DNF’ed a book in a long while, but oh, Melissa Marr, how I’m disappointed.

Let me start off by disclosing that I wavered on her popular Wicked Lovely series after we hit the middle books. There were just too many and I was tired of the plot. That being said, I came into this book and series with an open mind and hoped to God that I would love it.

Why this didn’t happen:

A) Too many POVs and characters popping up.

Sometimes it just got downright confusing and I found it hard to connect or care about any of these people.

Dang, that girl just made me cringe. Clearly she’s being set up as someone special but I just couldn’t take it anymore. She wasn’t particularly nice to anyone and didn’t seem to need good opinions from others. At least that was my impression of her.

It was repetitive as other reviewers have noted and it made the book drag a little. Maybe it prevented me from connecting with the characters too. Who knows. But something about it bugged me.

I JUST DON’T LIKE CREED. He doesn’t seem quite like a lovable bad boy or a very nice guy to play the love interest. I’d rather Lily pick anyone else (though I probably shouldn’t care ’cause I don’t even like her).

And then there’s Zephyr who seems cool enough but I don’t particularly think that’s happening. Plus, he seems to be denying himself from feelings for another girl and it’s just a bit much to me.

While I get these things aren’t the be all, end all of a story and other books may feature these flaws too, put together it just rubbed me wrong in this book. The only element I found myself liking was Eilidh (pronounced AY-LEIGH) and her POV. I empathized with her situation a bit and the potential budding romance, but she features so rarely here that it didn’t seem worthwhile to continue.

Maybe it’s just me but I tried to love this book and I couldn’t. It may not be so bad for others but it didn’t work for me. Marr may be a great fantasy author for some, but for now; her works on faeries just don’t captivate my heart.

Seven Black Diamonds could’ve been a great novel on friendships, romances and political intrigue with the fae. However, with too many POVs and characters to understand – not to mention the kinda writing that just bored me too easily – this book just couldn’t execute what I had hoped for it. It may just be me, but I don’t think this book is for everyone.

Fan or foe? Do you think faerie stories are getting overrated?

Reena Hale grew up with an intimate knowledge of the destructive power of fire. When she was a child, her family’s restaurant was burned to the ground, and the man responsible was sent to jail. The Hale family banded together to rebuild, and Reena found her life’s calling.She trained as a firefighter and then as a cop, always with the end goal in sight: to become an arson investigator.

Now, as part of the arson unit, she is called in on a series of suspicious fires that seem to be connected-not just to each other, but to her. And as danger ignites all around her, Reena must rely on experience and instinct to catch a dangerous madman who will not stop until everything she loves has gone up in smoke.

I was itching for a good mystery with a sprinkling of romance, and I thought, Hey I really adored some of Nora Robert’s mysteries before. Let’s give another one a try. Unfortunately, Blue Smoke may have sounded interesting in the synopsis but it’s really such a bore to get through.

The synopsis states in a concise manner how our protagonist Reena first encountered a fire and thus, set her on the path in becoming an arson investigator. But oh no! The prologue in this novel isn’t like, one chapter long like you may think. It stays in the good ol’ past for several chapters when Reena was 11. And then, when there’s finally a flash forward (thank heavens!), it only moves 7 years to when she’s 18 and in college and experimenting with things.

The pacing is way too slow in my opinion. Yes, the mystery and the fires revolving around her start in her past but I swear Roberts could have written it in a more concise manner. Descriptions of everything , from the food laid out (’cause they’re Italian so there’s gotta be a lot of food) to wedding decorations and planning, it just gets overwhelming. Not to mention, the names of different people coming in and out of the story in just the first several chapters.

Honestly, I think this plot had a lot going for it, but I just can’t make myself go through 20 more years of Reena’s life in this slow cadence of things. I hate giving up on books, but this one really deserves my DNF shelf.

And by the way, I could already tell who the culprit of all these mysterious fires was even from where I stopped.

Overall Recommendation:
With plenty of intrigue that has become one of Nora Roberts’ signatures, Blue Smoke seemed to have a lot of potential. However, with the slow progression in plot, moving in increments by the years through Reena’s life since she was a child, I just couldn’t make myself follow along with the intensity I wanted. It just became so boring, especially with the ridiculously in-depth descriptions of the tiniest details. I’m a little disappointed as I’ve loved some of her mysteries in the past, but if you’re okay with a slow pace and detailed paragraphs, then this might be an okay book for you. As for me? Hasta la vista. 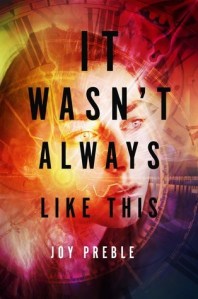 In 1916, Emma O’Neill is frozen in time. After sampling an experimental polio vaccine brewed on a remote island off St. Augustine, Florida, she and her family stop aging—as do the Ryans, her family’s business partners. In a way, this suits Emma fine because she’s in love with Charlie Ryan. Being seventeen forever with him is a dream. But soon a group of religious fanatics, the Church of Light, takes note. Drinking the elixir has made the O’Neills and Ryans impervious to aging, but not to murder—Emma and Charlie are the only ones who escape with their lives.

On the run, Emma is tragically separated from Charlie. For the next hundred years, she plays a cat-and-mouse game with the founding members of the Church of Light and their descendants. Over the years, a series of murders—whose victims all bear more than a passing resemblance to her—indicate that her enemies are closing in. Yet as the danger grows, so does Emma’s hope for finding the boy she’s certain is still out there . . .

I honestly thought I would enjoy this book. At first, I thought my discontent was from the writing style. This is my first book from Joy Preble, although I was very intrigued with her previous novel, Finding Paris. I laid that aside and just kept going.

I thought it’d be more romantic. Two protagonists who loved each other. No matter how long their separation was (like, seriously a 100 years?), they’d somehow find their way back to each other and try to get rid of the threat from some lunatic religious organization hell-bent on destroying them, unperturbed by killing other innocents whom they’d mistaken for her.

Unfortunately, it just fell flat. The boy never really makes an appearance in her life for the most of the story that I reached. Just the occasional flashback of what happened in their lives that changed everything (i.e. how they practically became immortal). He wasn’t physically present in her current and modern life. Kinda hard to appreciate that aspect of the story if he was all but just a fond memory.

I told myself to keep on reading. It’ll just get better, ya know? Right? But once I stopped for a break (at 58%), I just couldn’t continue and pick it up again. I was just so tired of the constant fear from some crazed church group who could be hiding in plain sight and re-branded from their original name. So with huge regret, I’m sorry to say that It Wasn’t Always Like This just didn’t end up working for me. I gave it my best shot.

I just hope that at the end of it, they find each other and get their second chance, after everything.

Overall Recommendation:
Well, I couldn’t really finish this book, stopping at 58%. However, it could’ve just been something that personally didn’t click with me. There was suspense from being chased by religious fanatics – who were also killers, by the way. The romance didn’t work for me because, well, they hadn’t seen each other in like 100 years. It’s not that I hated this novel, but I just couldn’t bring myself to finishing it, try as I may. Maybe it’d be a better read for others.