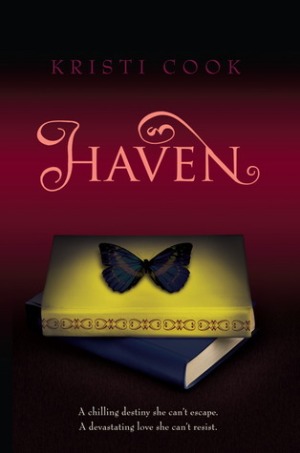 Violet McKenna thought she was crazy when she had a vivid vision of her dad’s murder—but when her premonition came true, her life fell apart. Then she found a new school: Winterhaven. There, Violet fits right in. All the students have special “gifts” like her own, and she quickly finds a close group of friends. But Violet’s attraction to an alluring boy becomes problematic when intense visions of his death start to haunt her. In her premonitions, the secret he is unwilling to share begins to reveal itself—and the unbelievable becomes reality. To Violet’s horror, she learns that their destinies are intertwined in a crictical—and deadly—way.

Warning: This review contains spoilers….’cause honestly, how am I supposed to rant about something major in this book without giving it away? (but really, it’s so predictable, I swear you’d guess it even before the answer comes out)

Okay, let me paint the scenario of this book for you. See if it starts to sound familiar in any way.

A girl moves to a new town/city. She goes to a new school, hoping to find friends and maybe fit in. She’s nothing extraordinary in the looks department. Yet, on the very first day of school, apparently the hottest guy makes eye contact with her and a connection seems to have formed. But, according to some of her new girl friends, this guy normally sticks to himself and never hangs with many people, especially girls.

Is this starting to sound a little familiar? Hmm?

He’s described to move quite fast, there one second next to her and gone the next moment she looks up. He’s quite pale, and hey, he’s a little cold to the touch. All women seem to be affected by his presence (dubbed the Aidan effect). Oh, and the fascinating part? He gives her the hot-and-cold treatment. One day he seems all into her, and the next, he’s off somewhere doing something and cancelling their plans. Later, he keeps trying to explain that he’s doing it for her own protection and that he has some BIG secret he can’t share without scaring her away. (Dun dun dun dun. He’s a vampire. No, seriously.)

Okay. I think I had enough. Who’s ready to guess that the above summary….totally sounded like the beginnings of Twilight? I know it’s hard to be original these days when tons of vampire books exist out there, but SERIOUSLY. Twilight was amazing, back in 2006…but now it’s rather overrated. The similarities were a little disconcerting. At least Aidan didn’t sparkle….or does he?

Thankfully, that’s mostly where the similarities stop. ‘Cause this girl ain’t Bella Swan. Violet can fight on her own (fencing champ, which is pretty cool), and definitely isn’t some damsel in distress in need of saving by her vampire boyfriend *cough*Bella*cough*.

Winterhaven was a rather cool setting. Some prestigious boarding school that has its own cafe, theatre, quad and tons of buildings. Kind of like a mini university, except for high school kids. Man, wish I went to a boarding school like that. Anyway, everyone here has “powers”–wait, I mean gifts (’cause it’s against the rules in this school to call them “powers”). Violet’s always had visions of things, normally terrible things, that were to happen in the future. Here, her friends don’t think she’s a freak, ’cause hey, they can telekinetically move things or even astral project themselves places. Come on, those are way freakier-tastic than collapsing in seizure-like fits when the visions come.

Violet’s friends were cool, each different in their own way with their gifts. However, the attention in the book was obviously not on them, so at the end of the day, even though they can be differentiated based on what they can do, I was never drawn to each individual based on who they are. They’re all nice, they all care about Violet and they’re dubious of any impending danger. I could as easily replace one girl’s name with another and it would make nearly no difference.

And that leads me to the romance. And Aidan? I wasn’t feeling the chemistry very well with him and Violet. Sure, they were described to have some connection that linked them, and the hyperawareness of each other, but still. It was too…instant. What does he see in her? What does she see in him, besides that all-female attraction to him? So when they say they “love” each other, I was totally uncertain as to how that attraction even grew to such heights. Look, this undeniable attraction was kinda cool…back in 2006 as I mentioned before. It was a little harder to stomach this time around. So that made me enjoy Haven a little less than if I had actually cared much for Aidan.

The one thing I will say was pretty cool was trying to be scientific with vampirism. The science of it, being a science nerd myself, was rather fascinating and was compared to a parasitic infection like malaria. I think that was definitely something no other vampire novels have tried out, and for that, I’m rather intrigued to see if Aidan can indeed find a cure for his “disease”.

Overall Recommendation:
Honestly, Haven held way too many similarities to Twilight in the first large section of the book, which may have made me a little antagonistic with the whole Aidan-Violet romance. It was way too fast and based off of some crazy attraction between the two that made it seem less real and not as romantic as it sounds. This may have been cool with Twilight back in 2006, but it got old real fast.
With likeable enough characters and Violet being capable of holding her own when need be, Haven wasn’t all terrible. Set in an enchanting prestigious school where everyone has their own psychic gifts, it was intriguing to see all kinds of people working together and as friends. Lots of secrets abound and it’s up to Violet to figure them out before danger hits too close to her. So hey, besides the similarities, Haven can still hold its own in a rather large genre of vampire books.