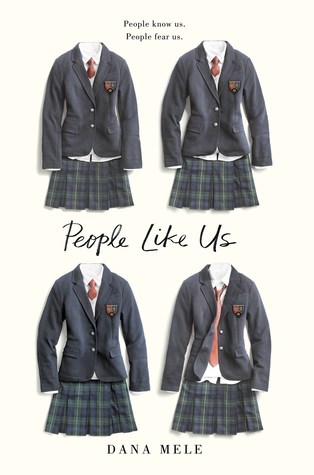 Kay Donovan may have skeletons in her closet, but the past is past, and she’s reinvented herself entirely. Now she’s a star soccer player whose group of gorgeous friends run their private school with effortless popularity and acerbic wit. But when a girl’s body is found in the lake, Kay’s carefully constructed life begins to topple.

The dead girl has left Kay a computer-coded scavenger hunt, which, as it unravels, begins to implicate suspect after suspect, until Kay herself is in the crosshairs of a murder investigation. But if Kay’s finally backed into a corner, she’ll do what it takes to survive.

Because at Bates Academy, the truth is something you make…not something that happened.

With a boarding school setting similar to Truly Devious, whodunnit suspect scenarios such as One of Us is Lying, and the cruelty of a popular it girl group likened to the popular Pretty Little Liars series, People Like Us feels both psychologically familiar yet carries a darker, more messed up undertone.

I don’t know what’s been floating around in the air lately but I’m really digging the dive into (psychological) thrillers and mysteries in YA. This book is part of that ongoing trend that should deservedly get more attention.

The novel starts off with a group of seemingly popular girls without a care in the world. They’re just leaving a party and BAM they find a dead body.

From there, it leaves your typical, simple whodunnit mystery. Our protagonist, Kay, is seemingly blackmailed by the dead girl. What a strange twist, huh?

I would love to feel more bad for her, but she’s not the most lovable person. She’s a pretty flawed, human girl with a secret past that we don’t know about. And that’s what makes it more fun to read and follow along what may happen next.

I flew through this book in almost one sitting. I wanted to know who’s next on this hit list created by the dead girl. I loved the artistry behind the tasks that Kay was forced to do in order to keep her secret. It was poetic and hauntingly cruel. You never knew who was next (and what did they do *gasp*) and who to trust. I sometimes could barely trust Kay’s own perspective because who knows if she’s hiding something huge from us?

Yet I found myself underwhelmed with other elements of the story.

Yes, everything – and everyone – was kind of messed up. The culprit wasn’t unguessable but the reasoning behind it all wasn’t amazing. The whys matter to me, not just the whodunnit anymore.

Kay’s secret that pushed her so far to protect was…interesting but the delivery to us, the unknowing readers, wasn’t the best. Maybe I’m just being picky, but there was something in the execution that prevented me from loving it wholeheartedly.

Oh by the way, you romance lovers, there was something present in the story for you too. Though at times I wasn’t sure it was all that necessary to force it in.

Kay’s bisexual so throughout the book, she was torn between her ex-boyfriend and her girl best friend. They made for great suspects with motives, no doubt about it, but it was a lot of drama that felt like it just filled in the empty gaps around the main mystery instead of adding to the story itself as an important point.

So as mysteries go, it was an immediately satisfying rollercoaster spin that couldn’t be stopped once it started – for the most part – but after getting off of it, there’re a few mixed feelings thrown in there. People Like Us definitely wasn’t quite what I expected.

A YA thriller that gives you a glimpse into the secrets at an all girls boarding school, People Like Us was a fast-paced read that took some weird turns along the ride. With a bisexual protagonist (full of romantic angst and drama) and her hidden secret propelling her on a task list sent from a dead girl, lies get unfolded and intrigue hits its max. Although it was a fun journey, the ending came somewhat abruptly that left a strange, but lasting, impression. If you’re one for mysteries (and boarding schools!), definitely give it a shot.