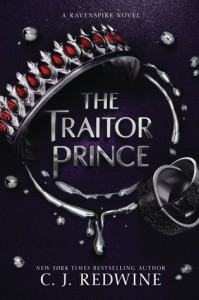 Javan Najafai, crown prince of Akram, has spent the last ten years at an elite boarding school, far away from his kingdom. But his eagerly awaited return home is cut short when a mysterious imposter takes his place—and no one believes Javan is the true prince.

After barely escaping the imposter’s assassins, Javan is thrown into Maqbara, the kingdom’s most dangerous prison. The only way to gain an audience with the king — and reveal Javan’s identity — is to fight in Maqbara’s yearly tournament. But winning is much harder than acing competitions at school, and soon Javan finds himself beset not just by the terrifying creatures in the arena, but also a band of prisoners allied against him, and even the warden herself.

The only person who can help him is Sajda, who has been enslaved by Maqbara’s warden since she was a child, and whose guarded demeanor and powerful right hook keep the prisoners in check. Working with Sajda might be the only way Javan can escape alive — but she has dangerous secrets.

Together, Javan and Sajda have to outwit the vicious warden, outfight the deadly creatures, and outlast the murderous prisoners intent on killing Javan. If they fail, they’ll be trapped in Maqbara for good—and the secret Sajda’s been hiding will bury them both.

This may be my favourite book from CJ Redwine yet! The Traitor Prince artfully pieces together another story in the Ravenspire universe, this time set in the deserts of Akram. While the story starts off with another character (the traitor devising a plan to steal the throne), we follow the male protagonist, Javan, a lot in the beginning which was a refreshing change.

The story was fairly fast-paced, and oh boy, pretty action-packed. With people working against him and betrayals coming from every direction, Javan gets sent to Maqbara, the infamous prison that’s changed since he’s been gone in another kingdom. There he meets Sajda, the warden’s slave, an initially fearsome girl with a deep secret.

Their romantic chemistry is subtle and not over done – just the way I like it. Redwine doesn’t make it seem like they instantly hit it off, or confess any huge attraction for each other instantaneously. In fact, they’re downright hostile to each other at first (particularly Sajda). To my delight, the transformation in their relationship as they’re forced to work together to escape Maqbara was so realistic and honestly, felt JUST right. As wariness slowly turned into trust, you can totally reach out and roll around in the feels there. Not just in their own relationship, but the tenuous ones forged in the heart of the prison.

If you’re not such a huge romance lover, never fear! There’re fights to the death in this novel.

That’s right. To the DEATH.

The descriptions throughout these fights and the messes Javan gets in with other inmates keep your blood pumping as vicious creatures – all crazily described including their abilities and fatal weaknesses – attack the prisoners from all sides. And they’re not this prince’s only problem! I love that I felt everything just as deeply as he did. The injustice that was done to him. The honour he tried to bestow on his family all these years that could disappear in this prison with him. But mostly, I loved how his character strengthened throughout this ordeal. His faith in his god wavered at times, but there was a purpose in his being here – a royal who wouldn’t ever get this chance – mingling with the lowest of the lows.

Now, if none of the above draws you into this story, I dunno what would impress you. To throw it in there, little sweet cameos/appearances or mentions of the previous protagonists in the Ravenspire series also feature. But if you haven’t read them, never fear! Sajda and Javan’s story work well on its own as well.

So what are you waiting for?

Overall Recommendation:
The Traitor Prince has outdone itself with a well-paced plot, continuous action and suspense (to the death style), and a slow simmering chemistry between the main characters. The emotion it can invoke in you is outstanding as we get drawn into Javan’s story from the very beginning. If you’re one to enjoy fantasies with the odds stacked against you and a slow-burn kind of romance that develops along with the characters, I’d say this is a book for you.

1 thought on “Review: The Traitor Prince by C.J. Redwine”