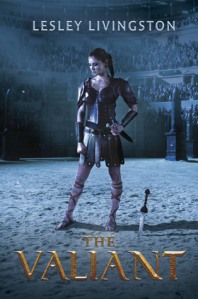 Fallon is the daughter of a proud Celtic king, the sister of the legendary warrior Sorcha, and the sworn enemy of Julius Caesar.

When Fallon was a child, Caesar’s armies invaded her homeland, and her beloved sister was killed in battle.

Now, on the eve of her seventeenth birthday, Fallon is eager to follow in her sister’s footsteps and earn her place in the fearsome Cantii war band. She never gets the chance.

Fallon is captured and sold to an elite training school for female gladiators—owned by none other than Julius Caesar. In a cruel twist of fate, the man who destroyed Fallon’s family might be her only hope of survival.

Now Fallon must overcome vicious rivalries and deadly fights—in and out of the arena. And perhaps the most dangerous threat of all: her forbidden yet irresistible feelings for Cai, a young Roman soldier.

I’ve loved this author since day 1 with her first published YA work on fairies and Shakespearean works. Likewise, Lesley Livingston’s latest series starting with The Valiant is a sight to behold with kickass female characters and an intriguing plot set in historical times.

Gladiators. What’s more to love about that? Well. Other than the fact that this book features FEMALE gladiators. Strong. Cunning. And lethal.

I liked Fallon. She kinda fell into this after the chaos that happened in her home land. But she gave it her all and trained herself as no princess would’ve been expected to know. For that, I admire Livingston’s ability to always write female protagonists that are funny, relatable and easy to like.

But the other thing to absolutely rave about is the wonderful research (with a pinch of imagination) that went into creating the beautiful setting of Julius Caesar’s Roman Empire. I liked how it featured as much Roman accuracy as the author’s imagination for the time period. It felt real enough while still being in the realm of fantasy and mysticism for how much of this really could’ve happened this way. For history buffs, I think you’d be pleased.

HOWEVER. The romance with a Roman soldier working under Caesar really helped tie it together. It wasn’t so much a forbidden love trope (although it still is) but it featured lovely conversations throughout the story that were both fun and added to the level of suspense and intrigue.

The Valiant continues strongly with what Lesley Livingston does best with her stories. Any fan of hers won’t be disappointed with this latest addition to her YA works, and new fans would be in the making as well. I’m looking forward to seeing what comes next in this series, and from her.

The Valiant features a cast of strong females who may fight in the ring, but redefines the bonds of loyalty. Mysterious and full of intrigue, Lesley Livingston brings another fantasy reimagining set in the historical Roman Empire of action, love and war. Fallon’s discovery of who she can be and the family she can make for herself was a wondrous journey to behold. I hope many others would come to realize just how phenomenal Livingston’s writing can be. This book does not disappoint.

3 thoughts on “Review: The Valiant by Lesley Livingston”