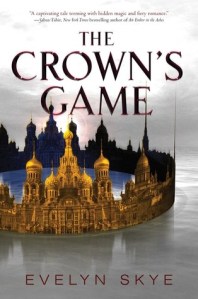 Vika Andreyeva can summon the snow and turn ash into gold. Nikolai Karimov can see through walls and conjure bridges out of thin air. They are enchanters—the only two in Russia—and with the Ottoman Empire and the Kazakhs threatening, the tsar needs a powerful enchanter by his side.

And so he initiates the Crown’s Game, an ancient duel of magical skill—the greatest test an enchanter will ever know. The victor becomes the Imperial Enchanter and the tsar’s most respected adviser. The defeated is sentenced to death.

Raised on tiny Ovchinin Island her whole life, Vika is eager for the chance to show off her talent in the grand capital of Saint Petersburg. But can she kill another enchanter—even when his magic calls to her like nothing else ever has?

For Nikolai, an orphan, the Crown’s Game is the chance of a lifetime. But his deadly opponent is a force to be reckoned with—beautiful, whip-smart, imaginative—and he can’t stop thinking about her.

And when Pasha, Nikolai’s best friend and heir to the throne, also starts to fall for the mysterious enchantress, Nikolai must defeat the girl they both love…or be killed himself.

As long-buried secrets emerge, threatening the future of the empire, it becomes dangerously clear—the Crown’s Game is not one to lose.

The Crown’s Game delivered a beautiful setting in nineteenth century Russia that stirred my heart, but ultimately didn’t capture it with its story.

I love the whole idea of this story. A Game set in place for 2 magical enchanters to fight for the illustrious prize of Imperial Enchanter. Add into the mix bits of wonderful magic and princes , you have the makings of a novel that I would absolutely adore to read.

It took me a long time to finish this book, clearly. And if I had to pinpoint what things really made this experience less than lovely, it would boil down to these few things.

1) The lack of connection

I liked Vika and I liked Nikolai, and I even liked Pasha although he was clearly not the ship I was cheering for in this love triangle (if one can really call it that?). But it was hard for me to really FEEL for these characters. Maybe it’s the 3rd person writing, but I’ve encountered plenty of books who write in 3rd person and still convey feeling as beautifully as first person narrative, if not even better. So I’m a little stumped how I felt so little for these characters over all. I didn’t feel shoots of pain when the cliffhanger ending took place. Just…a twinge of sadness that it had to be this way. So maybe my rating would’ve been higher if this was the only problem, something solely due to me.

2) The slownessssss of the book

For a book that has really short chapters (like honestly, some were less than a page), I dunno how it felt so dragged out. The Game took a while to get started, and the meeting of the enchanters wasn’t as quick as I thought. But then, the Game itself wasn’t as fast-paced as the synopsis might’ve suggested. How can someone take so long to make their turn? Vika and Nikolai alternate their moves by showing off their power in a way that would impress the tsar of Russia, and while they were impressive in some ways, this wasn’t the exciting feats of magic to be performed as I suppose I was hoping for. Turning a river into a display of colours and making a wardrobe that would outfit you however you wish isn’t all that exciting at the end of the day. Impressive, yes, but not exciting.

3) The lack of romance

Huh? How’s that even possible? I thought this book was on a love triangle. Oddly enough, nothing truly moves very fast on this front. True, it’s not the best timing to be falling in love what with the dangerous Game they’re playing, but it could’ve happened. And it’s not like having little romance is a bad thing. Sometimes it’s the perfect move for a novel, but this WAS NOT one of those kind of stories. Then somehow the characters “fall” for each other, and it just didn’t please me as much when the magic of their love never really came across the pages.

Sigh. I guess I can say the overall feeling was a bit of disappointment. I know other reviewers enjoyed the novel, but it wasn’t like I put very high expectations for this. I’m a little sad that the rating isn’t as high as I had hoped it, and even after a break while reading this book, it hadn’t gotten any better. When you’re feeling a little apathetic to Vika and her love life, you know that the experience isn’t gonna get so much better. The only highlight was Nikolai and the beauty of his magic and his unique backstory which unfolded in slightly surprising ways.

Overall Recommendation:
The Crown’s Game had a lot of potential going for it as a historical fantasy set in Russia. With this setting well-researched and an author who actually knows her stuff, I was disappointed with the slowness of the plot – which also had so much potential with the Game between enchanters – and the lack of connection I felt with the characters. Vika was just another strong-willed protagonist but lacked true depth to her personality. The love triangle wasn’t even fully present as the romance took a huge backseat to everything and felt more insta-love than anything. I will read its sequel, but my expectations are already wayyyyy down there.