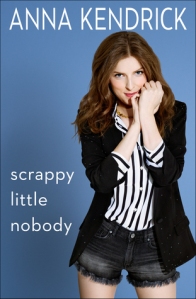 A collection of humorous autobiographical essays by the Academy Award-nominated actress and star of Up in the Air and Pitch Perfect.

Even before she made a name for herself on the silver screen starring in films like Pitch Perfect, Up in the Air, Twilight, and Into the Woods, Anna Kendrick was unusually small, weird, and “10 percent defiant.”

At the ripe age of thirteen, she had already resolved to “keep the crazy inside my head where it belonged. Forever. But here’s the thing about crazy: It. Wants. Out.” In Scrappy Little Nobody, she invites readers inside her brain, sharing extraordinary and charmingly ordinary stories with candor and winningly wry observations.

With her razor-sharp wit, Anna recounts the absurdities she’s experienced on her way to and from the heart of pop culture as only she can—from her unusual path to the performing arts (Vanilla Ice and baggy neon pants may have played a role) to her double life as a middle-school student who also starred on Broadway to her initial “dating experiments” (including only liking boys who didn’t like her back) to reviewing a binder full of butt doubles to her struggle to live like an adult woman instead of a perpetual “man-child.”

Enter Anna’s world and follow her rise from “scrappy little nobody” to somebody who dazzles on the stage, the screen, and now the page—with an electric, singular voice, at once familiar and surprising, sharp and sweet, funny and serious (well, not that serious).

I think Scrappy Little Nobody would’ve been even better if I had listened to the audiobook with Anna Kendrick reading it to me with all the proper intonations. But even with my imperfect understanding of what should be highlighted in the novel, her imagined voice in my head managed to deliver the perfect balance of snark (which was the majority of the book) with a tiny bit of heart mixed in. Honest to the point of self-deprecating, Anna’s voice brings to life her own story that kept me mostly entertained with the stories she chose to share and her down-to-earth attitude about her life even with her current fame.

I’ve known Anna Kendrick since she first was cast in a very minor role in Twilight. Yes, that’s right. She was Jessica Stanley in that novel. And I only knew her name ’cause I stalked all the cast actors and actresses prior to the movie release. (And this may tell you how Twilight-freaky I was in my early teen years). But she’s become so much more well-known since then, and she very much deserves it. Scrappy Little Nobody details her beginnings and highlights how her life has changed (or barely changed) since then.

Her beginnings began in theatre and along with lovely little Anna pictures, this book describes a mostly ordinary childhood with the occasional trip to New York for her roles in theatre productions. This was one of the things that I felt lowered my rating a little. Although important, her beginnings dragged out the novel a little and it made it hard to continue reading straight through. But the one thing I loved about this section was the way she really set the tone for the rest of the novel. She wasn’t some special somebody, even in the beginning. Even after landing certain roles, like her first film credit, pride wasn’t a huge factor in her attitude towards friends and classmates at school. Of course it’s natural to want to share tidbits about the new thing in her life, like, hey, I went to the Sundance Film Festival last week and I met cool people, but none of her “luckiness” got to her head. In fact, she even stated,

“I sometimes think that I should have a sense of pride knowing that I’ve achieved more than my sixteen year old brain would have ever let me imagine, but mostly it’s just the opposite.
I think self-doubt is healthy. And having to fight for the thing you want doesn’t mean you deserve it any less.”

With her very down-to-earth attitude and her general Anna quirkiness, her stories about very regular things like BOYS (omg, that section!) and friends and her initial struggles in LA were made all that much more interesting. Add to that the very honest and sometimes very personal examples she included, it sometimes felt like Anna was sitting next to you telling you this story like you were her friend. Honestly, I think the audiobook would’ve made this 10x better.

But the best part was hearing her stories of being in Hollywood, post-Twilight and shooting in stardom with Pitch Perfect. From her very detailed imaginary holiday parties that she wished to host, to the surprising behind-the-scenes at award shows, and the craziness that is answering the same questions to a multitude of journalists all day, this book has it all. The stories at the end were rather quick and had a specific point, never quite dragging on too long. It was enough of a tidbit of each of these areas of her life that made it satisfactory (although to be honest, I would’ve loved hearing more about some of those experiences…like being rained on during that Twilight wedding scene).

She ended off in the last section of the book very aptly with her book title. And it reinforces her overall attitude about herself. She admires others whom she works with, either directors or actors, and never seems to portray anything but awe and gratitude in working with these different, accomplished people. But she’s also so relatable even to us normal folks. She’s not perfect. She has anxieties and fears about the next potential placement. She doesn’t always want to dress up and go out, but is in fact a fellow Netflix binge watcher and take-out eater for weeks at a time. I guess being famous and leading such high-profile roles on film makes her seem superior but in fact, she reminds us that she’s indeed just a scrappy little nobody (who likes to dole out fun advice like using a childhood psychotic picture to encourage persistence and hard work).

Overall Recommendation:
Scrappy Little Nobody was a fun, entertaining and very honest look into Anna Kendrick’s beginnings and journey into fame. With her quirky and fun attitude, her stories were made so much more interesting and it felt like she was personally sharing these things with you. Her down-to-earth tone made her seem very relatable, no matter if we haven’t experienced half the things she did. She never makes you feel like you’re her inferior, but rather that we’re all facing similar issues, although she has some comical advice to give on getting over some of these problems. Having no issue with making fun of herself, Scrappy Little Nobody was written with heart and if you’re a fan of hers, I would suggest you read it. She makes an autobiography fun to read if that’s not normally your thing.