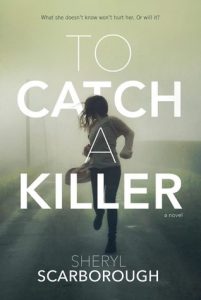 Erin Blake has one of those names. A name that, like Natalee Holloway or Elizabeth Smart, is inextricably linked to a grisly crime. As a toddler, Erin survived for three days alongside the corpse of her murdered mother, and the case—which remains unsolved—fascinated a nation. Her father’s identity unknown, Erin was taken in by her mother’s best friend and has become a relatively normal teen in spite of the looming questions about her past.

Fourteen years later, Erin is once again at the center of a brutal homicide when she finds the body of her biology teacher. When questioned by the police, Erin tells almost the whole truth, but never voices her suspicions that her mother’s killer has struck again in order to protect the casework she’s secretly doing on her own.

Inspired by her uncle, an FBI agent, Erin has ramped up her forensic hobby into a full-blown cold-case investigation. This new murder makes her certain she’s close to the truth, but when all the evidence starts to point the authorities straight to Erin, she turns to her longtime crush (and fellow suspect) Journey Michaels to help her crack the case before it’s too late.

To Catch a Killer left me second-guessing my whodunnit culprit while still making it exciting with real science, albeit lacking a bit in the “scare” factor.

I am always up for a good mystery, and lately I’ve been in a funk craving a good, suspenseful story to gush and pour over. There aren’t many YA novels that I find does justice to a good crime story. It could be ’cause I read and watch many crime fiction and shows.

This novel captures the essence of forensics in a YA context, so watch out for any skeptical scoffing over the fact that young teenagers do better police work and evidence collection than the ACTUAL police. Erin was an interesting protagonist. She wasn’t deterred so easily by adult figures who kept telling her that she should “just get over” her past and forget the emotions in the aftermath of her mother’s violent death. Sometimes these secondary characters, particularly her guardian Rachel and Erin’s two besties Spam and Lysa, really annoyed me. I get they want to protect her, and it adds to the whole main character versus the world kinda trope but it honestly just got on my nerves after a while. Both sides had decent points for why they were doing what they thought was best, but better communication would’ve definitely gone a long way.

The current mystery surrounding the bio teacher, Ms. P’s death was intriguing, especially once it was linked to her mother’s death. I enjoyed the Erin’s thought process and planning as she set about connecting the dots through her evidence. Although it may not be for everyone, I found the strongest point in this story was the cute little quotes taken from her FBI Uncle Victor that was oddly quite accurate. The story does go more into detail about genetics (aka simplified to just DNA) and how to extract it – ahem, my fav scene was when they made a homemade gel electrophoresis for separating the DNA bands (the bio nerd inside of me is rejoicing at seeing an experiment I do in real life pop into a YA novel!) – but I find they add to the story instead of detracts from it. Erin’s character revolves around wanting to solve murders, particularly her mom’s. And good evidence collection and testing are the forefront of determining how a case may go.

What I thought wasn’t so great or as realistic was the romance. Yep, you heard me. The ROMANCE. Journey Michaels was the love interest for Erin and although he seems like a rather nice guy, I don’t feel we get to know him very well in this story. He’s there to help connect the dots with Erin by providing info that they don’t already know, and maybe to make the story more interesting. But ultimately, he didn’t really need to be a part of this book, which says a lot when it comes to one of my FAVOURITE things I find normally essential in a story. I didn’t set any ships for them, not really. And it felt a bit fast for them to fall for each other in a non-platonic way. Sure, emotions are rampant when you feel like you’re in danger, but I suppose their path to romance wasn’t depicted as well as it potentially could’ve been.

Last comment: what’s with the names in this story? Spam, which is short for SAMANTHA, was an oddball name I’ve never come across a story before. And the only way I figured out her real name was Samantha instead of actually Spam was ’cause someone called her by the full name wayyy later in the book. Also, Journey’s not such a hot name either…It was just very interesting.

Overall Recommendation:
To Catch a Killer isn’t some scary book that’ll keep you up at night, but it does sufficiently for the mystery that is the heart of the story. Erin Blake is an easy to follow protagonist with a love of forensics (that actually dives into real forensics), although it sometimes felt like no one else understood why she needed to do this for her mom’s case. Family and friendships are other things that’re portrayed here, but ultimately this is a story about a killer who needs to be brought to justice (by apparently teen CSIs). However, it falls a bit flat in the romance category with Journey, but all in all, the ending wasn’t the most predictable and closes on a happy note that should satisfy most readers.