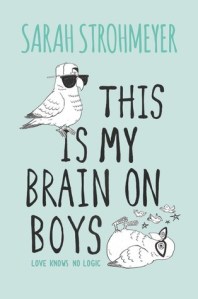 Addie Emerson doesn’t believe in love, at least for herself. A straightlaced, brilliant girl, she’s more interested in getting an A than falling in love. But Addie is determined to prove the science of love—because Addie Emerson does believe in science.

Science tells her that “love” is nothing more than the brain’s state under the influence of certain chemicals. And by artificially stimulating those chemicals, the brain can totally be tricked into falling in love. So Addie decides to apply that knowledge—and make her classmates fall in love—to win the coveted Athenian Award for Science in her elite private school. One way to speed up the process—adrenaline—she’ll put her classmates in dangerous, high-risk situations . . . and research the fallout.

But a mysterious new guy keeps messing with her plans. And she kind of can’t stop thinking about his gorgeous brown eyes. With backstabbing competitors—including her former lab partner, the preppy, wealthier-than-thou Dex—and more than one pair of star-crossed lovers—can Addie manage to salvage her experiment and win the Athenian? And what happens if she does the unthinkable—and falls in love?

Funny, smart (mostly), and intriguing, this is not just any regular summer read from Strohmeyer. This is a book that both drew me in with its premise as well as kept me entertained.

Addie Emerson is a brilliant girl. And very socially awkward. She loves neuroscience and anything related to the brain. As a science student myself, I could appreciate her random use of neuro-related terminology. It may get a tad bit overwhelming for those who don’t necessarily appreciate such huge words and don’t really understand what all these different neurohormones are, but for me, it was absolutely perfect.

The science was mostly okay, though a couple of places I swear the terminology was mixed up. However, even for science parts that were more fantastical than real, I’m not the kind of person who gets pissed at that. It’s not meant to be a realistic science paper. This is a fun novel that focuses on a protagonist who uniquely loves science, and with a project on love . What more can you hope for? So the rest of my review focuses on all the things this book does right. If you’re one of those people who DO get annoyed at “less-than-realistic science” in a fictional book meant for teenagers, then I think you should go elsewhere right now. Like, right now.

Okay, now where were we? Ah, Addie Emerson. She’s naive in social attitudes and pleasantries, as well as takes every word literally (even slang and common phrases) but she has a good heart. Right off the bat, you enter her POV and see how she sees the world. It’s different. It’s fascinating. And it’s very much hilarious.

“They didn’t reject me because I’m socially awkward, did they? I’ve read plenty of books on the social behavioural patterns of adolescents. I know to keep at least forty-six centimeters between myself and others to ensure enough personal space.”

She’s a protagonist that you can stand behind. Over the span of the book, you figure out what her project is that she needs to work on to win a scholarship for college. And the fact that she’s been victimized in the past.

And hence, bringing in our second POV in the book, Kris, made the story even more fun. He’s the total opposite of Addie. They meet right at the beginning of the book and he brings freshness and worldly passions to balance out the colder, scientific end of the plot. He only wishes to make amends for what he’s done in the past, and he finds that this summer of “punishment” may have been the best thing that’s ever happened to him. His presence makes everything more complicated for Addie, and this is one chemical reaction – I mean, relationship – that I can appreciate.

The other secondary characters were maybe a bit cliche and stereotypical but that doesn’t mean they don’t bring out the fun and goodness of this story. From Dexter, the other extremely awkward scientist in this book, to Tess as a Drama Queen and actors’ daughter, these people jump out and make you wanna laugh with them or just give them a good punch in the face.

All in all, I’ve never been a huge fan of Sarah Strohmeyer’s past works but I do believe This is My Brain on Boys is one piece of work I can stand behind. It’s truly a hilarious and marvelous read.

Overall Recommendation:
Strohmeyer has outdone herself with this smart and entertaining book on science and love. Addie Emerson is a brilliant neuroscientist who fancies herself an expert on the chemistry of falling in love. With her quirky mannerisms and naivety, it’s very hard not to like our spunky protagonist. However, a chance meeting with Kris turns everything upside down for Addie and her experiment. I enjoyed the ups and downs of their relationship, especially when Addie tries to explain physical attraction with science. With pieces of hilarious prose and fun use of neuro-related terminology, This is My Brain on Boys is a perfect read for this summer, in particular for those with a tiny penchant for “less-than-real science” thrown into their novel.