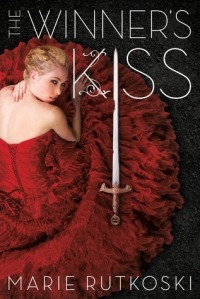 Some kisses come at a price.

War has begun. Arin is in the thick of it with untrustworthy new allies and the empire as his enemy. Though he has convinced himself that he no longer loves Kestrel, Arin hasn’t forgotten her, or how she became exactly the kind of person he has always despised. She cared more for the empire than she did for the lives of innocent people—and certainly more than she did for him.

At least, that’s what he thinks.

In the frozen north, Kestrel is a prisoner in a brutal work camp. As she searches desperately for a way to escape, she wishes Arin could know what she sacrificed for him. She wishes she could make the empire pay for what they’ve done to her.

But no one gets what they want just by wishing.

As the war intensifies, both Kestrel and Arin discover that the world is changing. The East is pitted against the West, and they are caught in between. With so much to lose, can anybody really win?

I honestly may have expected too much from this book. The Winner’s Kiss is the dramatic conclusion of the Winner’s Trilogy, filled with battles and Kestrel’s cunning wit to outsmart her homeland’s emperor and entire kingdom. Including her father, the general.

It picks up right where the previous book left off, thank goodness. What with all the incessant misunderstandings in the previous novel, I was starting to think that nothing could ever get rid of that underlying frustration I get whenever Arin and Kestrel are near each other.

So with abated breath, the story continues with Kestrel hauled off to the Middle of Nowhere as a prisoner of war. Shocker. Her father betrayed her.

I have always loved Rutkoski for her ability to still weave a great story without the unnecessary drama of a love triangle. Yes, the amount of misunderstandings was overwhelming but in a different way. However, the obstacle that keeps our two favourite people apart this time was unexpected and kind of brilliant in its own rights. I had wished that, as the title states, Kestrel better get that darn kiss she so deserves, and Rutkoski doesn’t disappoint in that either. I won’t ruin any of the romantic nuisances of it, but I think it can be satisfactory even for the harshest critics out there. It satisfied me, after all, and I most definitely criticized this.

Along with the much awaited reunion and final understanding between them, the story also spiked up in action. With allies from another kingdom come to help, they may actually stand a chance against the forces of Valoria. I wouldn’t say the book lacked in any suspense, but at times, it just felt a little slow to me when the army’s moving from this place to that while assessing the dangers from all fronts. Sure, that’s Kestrel’s thing, but it didn’t help pick up the pace any more.

What could have possibly added to this bit of slowness was the way Rutkoski writes. I do enjoy the way she can poetically describe a scene. It’s not all that colloquial or conversational. It’s great. To an extent. This kind of writing also makes me feel, as the reader, a little more detached emotionally from everything that’s going on. We move from what Kestrel’s feeling, and then to Arin, and back. All in a couple of sentences. My heart just wasn’t as invested into it as I could have been, I suppose. This may just be something up with me though.

All in all, this conclusion was satisfactory, in particular the ending. It ended off with a twist right up Kestrel’s alley and I was left hooting for joy at the way it all was splendidly handled.

Overall Recommendation:
Written in the beautifully poetic prose that’s come to be expected by Rutkoski, The Winner’s Kiss somewhat lives up to its name and provides a resounding conclusion both in battle and in love for our protagonists Kestrel and Arin. I wanted to love it more, but the occasional slowness to the plot and emotional detachment made it hard. Overall, the story provides everything that Rutkoski promised: retribution for the Herrani and an epic adventure that Kestrel and Arin lead us through.