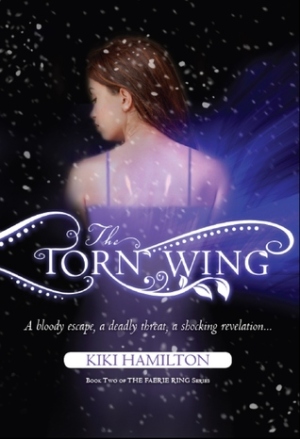 A bloody escape, a deadly threat, a shocking revelation…

As an orphan who stole the Queen’s ring – only to find the ring was a reservoir that held a truce between the world of Faerie and the British Court – Tiki’s greatest fear suddenly becomes all too real: the fey have returned to London seeking revenge. As war escalates in the Otherworld, Queen Victoria’s youngest son, Prince Leopold, is attacked. In order to protect her family and those she loves, Tiki needs to know the meaning of an fáinne sí, the birthmark that winds around her wrist. But will she be brave enough to face the truth?

Hmm, where should I start? The Torn Wing continues the story of Tiki and her band of misfit orphans, now living with the ever-handsome Rieker, aka Lord William Richmond.

I’ve always loved the historical setting of 19th century London. To mash it with the land of the fey is just perfect. Two worlds, both uniquely beautiful in their own way, with a deep mystery at the heart of it all.

Right from the prologue, there is a stirring for war as the UnSeelie Court threatened to take over both the thrones of the Seelie Court and of London’s from Queen Victoria. The mystery surrounding Tiki’s involvement with the fairies is further developed, although her initial denial of any such involvement deeply annoyed me.

The characters were sweet and intensely themselves. By that I mean, Hamilton writes in a way that makes each character something special and uniquely their own. Tiki’s family of orphans are all so different, not just because of their age. They are young, but their eyes have seen the horrors of living on the streets. They’ve developed street smarts, they’re loyal and caring for others less fortunate, yet they still maintain a sense of innocence. It’s hard to describe, but even when you want to shake them for being stubborn or doing little petty things, these are trademarks for what makes them such great characters. They come alive, doing things as little children or young orphans do.

With such great secondary characters, of course the protagonists were also enjoyable to read. Tiki may be hugely stubborn, but her heart holds enough love for anyone. Rieker always remains an enjoyable love interest, and I was a little saddened to see that Hamilton didn’t further develop him in any way in this book at least. Besides being a love interest, he’s different from any other main male characters in the YA genre these days. He also lives a double life, as a pickpocket and a lord, but there’s so much more to him. He’s just not predictable, which makes him more exciting.

The plot wasn’t as intense, although the book started off with a chaotic event. The main thing Tiki and her gang were involved in was finding the Stone of Tara, which would roar for any true queen/king of Faerie. Besides that, it didn’t really pick up too much. Mostly, Tiki was learning to accept what she may be, and Rieker was dealing with…an old frenemy.

Larkin. I don’t know what to make of her. From The Faerie Ring, I thought I knew what to feel for her, but she isn’t a straight-cut villain. There are so many layers to her, and I’m still figuring her out as I’m writing this.

Hamilton is good with the twists and turns. As new characters come into the story, new pieces of information keep falling out that continually surprises me. My goodness, talk about unpredictability. It’s rather exciting!

Lastly, I have to say, not everyone loves historical novels. I myself sometimes do find it a tad tiresome as it’s set in a society that may not be as exciting or fun as modern or even post-apocalyptic societies may be. However, to mesh olden day London and its real life history (i.e. Queen Victoria and her sons), with similarly “true” legends of the fey there, it’s absolutely fascinating . I love the author’s note explaining real life places where Tiki and her friends have gone to in the novel, and teaching the readers how to pronounce some of the Gaelic words that are used. It makes everything more real and solid, knowing Hyde Park and Buckingham Palace are real places I could visit if I wanted to.

It takes talent to creatively piece actual facts with an imaginative world of faerie lore, and to do it with such elegance and air of magic. For that, even though the pacing wasn’t all too amazing in this one, The Torn Wing has reminded me of what storytelling should be like these days. It is DEFINITELY a read that needs to be in your collection of “read books”.

Overall Recommendation:
I may be biased, but I absolutely love the setting in which this series takes place in. Imagine 19th century London with a hidden veil of the Otherworld of the fey at certain locations. And these places take into account real life locations in London, like King’s Cross Station or Hyde Park.

Cemented into this glorious setting, a dark adventure unfolds as Tiki is drawn farther into the dealings of the fey, with an old enemy coming back to warn her and the gang of an impending war. Wrought with well-developed characters from The Faerie Ring and new ones appearing, Hamilton delivers unpredictable plot twists and surprising developments as some answers are given of Tiki and Rieker’s involvement with the faeries.