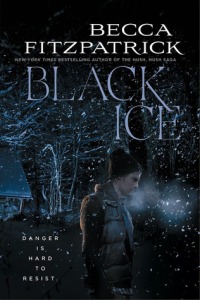 Sometimes danger is hard to see… until it’s too late.

Britt Pfeiffer has trained to backpack the Teton Range, but she isn’t prepared when her ex-boyfriend, who still haunts her every thought, wants to join her. Before Britt can explore her feelings for Calvin, an unexpected blizzard forces her to seek shelter in a remote cabin, accepting the hospitality of its two very handsome occupants—but these men are fugitives, and they take her hostage.

In exchange for her life, Britt agrees to guide the men off the mountain. As they set off, Britt knows she must stay alive long enough for Calvin to find her. The task is made even more complicated when Britt finds chilling evidence of a series of murders that have taken place there… and in uncovering this, she may become the killer’s next target.

But nothing is as it seems in the mountains, and everyone is keeping secrets, including Mason, one of her kidnappers. His kindness is confusing Britt. Is he an enemy? Or an ally?

BLACK ICE is New York Times bestselling author Becca Fitzpatrick’s riveting romantic thriller set against the treacherous backdrop of the mountains of Wyoming. Falling in love should never be this dangerous…

I wasn’t sure for the longest time what I would end up rating this book as. The first approximate half of the book dragged out a little longer than I would’ve liked, with our protagonist Britt and her bestie Korbie being dragged into a hostile situation with two men in the middle of a huge snowstorm. That’s basically what the synopsis already says, right? So I was waiting to see the action come in rather impatiently.

That being said, Black Ice really surprised me after reaching a certain point. I know a lot of other reviewers were anguished with the apparent Stockholm syndrome developing between Britt and one of her captors, Mason. However, I never really felt that Becca Fitzpatrick depicted him as a clear-cut “bad guy”.

Whatever the situation may have been, even when it got downright scary and menacing for the girls, Mason was always surprised with what his partner was willing to do or say to get what he wanted. It was like he didn’t want any of this to happen, but was helpless in stopping it. He was a puzzle to be solved because he clearly wasn’t simply a straightforward criminal. He hadn’t even wanted the girls to get kidnapped in the first place.

So, Stockholm syndrome? It might still be a little bit, on Britt’s part. But as the story progressed, she had many chances to get away. Mason wasn’t really holding her captive anymore. She had the choice. Can I really say that their ensuing chemistry bothered me? No, not really. It went as any fast-paced and intense romance went. Some chick-lit books have even faster whirlwind romances. Boy meets girl, BAM. Instant love.

Their attraction, I felt, was realistically played out, especially when it came to the conclusion of the story. I can’t say much more than that without giving away too much, but I really think Black Ice has a lot more to offer than the initial thought of “Eww, why does she have to fall for one of the kidnappers?”.

Britt is also the kind of girl who has always depended on the men in her life to help her with things. She has a protective father and older brother who baby her. She just felt that if it came to trouble, they would be there for her. Now, I liked that she was able to grow a backbone and figure out through this horrible situation that she could be strong on her own, and even be relied on by a male. Mason helped her do that, so how can I possibly dislike him? He’s sweeter than any other character in the story, including Britt’s somewhat deranged best friend Korbie.

Why do I call Korbie deranged? She keeps a list in her diary comparing her and Britt’s achievements or owned accessories. Then she gives out points between them, like 10+ points for having a more luxurious car than Britt’s old Wrangler. Like, come on! What kind of best friend would do that? Honestly, Britt needs to find better people in her life. Don’t get me started on Calvin.

The plot “twist” was rather predictable, or at least I saw it from 100+ pages away. Don’t let that deter you. Fitzpatrick still makes it interesting as you follow along and see how Britt can possibly get off this mountain alive.

Overall Recommendation:
Black Ice deserves more than its label as being a rather creepy romance delving into Stockholm syndrome. Mason was never a clear-cut “bad guy” that we were meant to hate immediately upon reading about him. There was a whole lot more to his story than what the situation may have made him seem. Sure, Britt may have started to fall for him while she was still under his “captivity” but she was even knowledgeable about what Stockholm syndrome was, and she knew there was a mystery to be solved around his presence in the mountain.

The intensity of the story picks up in the latter half, but I’d say that living through the slow pace of the first half was worth it for what happens later. With loose ends being tied up, and the ever constant nagging thought that a murderer is among them on the mountain, Black Ice may be quite the entertaining read.