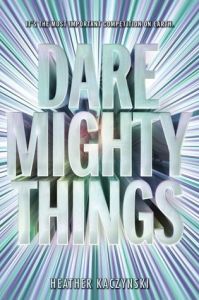 THE RULES ARE SIMPLE: You must be gifted. You must be younger than twenty-five. You must be willing to accept the dangers that you will face if you win.

Seventeen-year-old Cassandra Gupta’s entire life has been leading up to this—the opportunity to travel to space. But to secure a spot on this classified mission, she must first compete against the best and brightest people on the planet. People who are as determined as she to win a place on a journey to the farthest reaches of the universe.

Cassie is ready for the toll that the competition will take; the rigorous mental and physical tests designed to push her to the brink of her endurance. But nothing could have prepared her for the bonds she would form with the very people she hopes to beat. Or that with each passing day it would be more and more difficult to ignore the feeling that the true objective of the mission is being kept from her.

As the days until the launch tick down and the stakes rise higher than ever before, only one thing is clear to Cassie: she’ll never back down . . . even if it costs her everything.

Dare Mighty Things holds tightly to a suspenseful twist that underlies the simplicity of the main plotline, and is surprisingly thrilling upon its reveal. It definitely shocked me out of the predictable rut I had placed it in.

There’s a lot of interesting things that were a first for me in this book. Although it was marketed as a selection process similar to The Selection, it’s a lot more grueling academically and physically. Brilliant young minds from across all of the world competing for a spot in NASA’s joint program in sending someone into space with a crew of seasoned astronauts? Believe me when I say the words here sometimes get so big that even my science-loving brain is trying to figure out the physics.

This bunch of young adults ranging in age from 18 to 25 or so were written in such a realistic way that it felt you could’ve met someone them in person. Their personalities weren’t so cliched as the socially awkward yet ridiculously smart nerds. Instead, they were completely multi-faceted and wholly tangible.

That included the protagonist, Cassie Gupta, an Indian-American girl who identified as asexual. This little tidbit wasn’t made clear straight off the bat, but it was kind of implied under the surface for a while even before it was explicitly identified. Personally, I liked her, all of her. Her mind was brilliant, but seeing how she interacted with others and how she developed from the most anti-social person I’ve read about yet to someone who truly valued the friendships she’s made throughout selection was above all intriguing. Her good friends, Emilio and Mitsuko, were both fun yet understandable characters to keep the story engaging but also relatable. I thought the whole cast was well-written.

There was always a hint of potential romance with foreign diplomat, Luka. Considering she’s asexual, there is still a considerable amount of underlying tension going on that was fun. Whether a true romance in any sense would develop, I’m satisfied with the way things are relationship-wise. Heather did a great job in making it so that we, the readers, aren’t terribly dissatisfied with an element of any YA story that a ton of people look forward to (myself included).

While I’ve been raving about firsts and things that were great, the setback still remains the pacing of the plot. I honestly think the selection process took too long to get through. Nothing much happens until you hit the 70% mark. Sure, people slowly dwindle away as the competition are kicked out of the program, but it kept bothering me that the SECRET about the program wouldn’t reveal itself until almost the end. That’s when the true suspense and action really started ratcheting up. I had to satisfy myself with rampant theories about what it could be until then (I secretly was wondering if the competition wasn’t really getting sent home but might’ve led to a more sinister outcome upon rejection from the program).

I can’t say if I loved the way the story twisted at the end or not. It was a bit surprising, although the more I think about it, the more I should’ve seen it coming. I suppose I was pretty far down the rabbit hole I had dug out for this story in my wild theories to have considered another alternative. But anyhow, Dare Mighty Things brings with it a mighty strong debut filled with a cast of intelligent yet different individuals who have to ask themselves one huge question: just how far are they willing to go to make history for mankind in the vast unknowns?

Overall Recommendation:
Dare Mighty Things has many things that should intrigue a fan of sci-fi, including a mysterious program with an unknown objective into space exploration and a cast of diverse characters. Regardless of the lack of romance that occurs in this book, the friendships Cassie develops (which says a lot for a competitive anti-social girl like her) are just a thrilling as she navigates the challenges in attaining the prized spot among the space crew. I loved the science – albeit the sci-fi type that pushes the plausible – and the simmering suspense of what lay ahead for these brilliant minds to discover. If it wasn’t for the ridiculously slow plot, I’d say this would make it one solid debut. As it is, this book should still satisfy lovers of space and sci-fi.