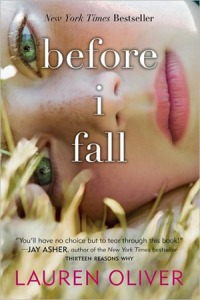 With this stunning debut novel, New York Times bestselling author Lauren Oliver emerged as one of today’s foremost authors of young adult fiction. Like Jay Asher’s Thirteen Reasons Why and Gayle Forman’s If I Stay, Before I Fall raises thought-provoking questions about love, death, and how one person’s life can affect so many others.

For popular high school senior Samantha Kingston, February 12—”Cupid Day”—should be one big party, a day of valentines and roses and the privileges that come with being at the top of the social pyramid. And it is…until she dies in a terrible accident that night.

However, she still wakes up the next morning. In fact, Sam lives the last day of her life seven times, until she realizes that by making even the slightest changes, she may hold more power than she ever imagined.

Before I Fall definitely has that extra something that propelled it into fame when it was first published, where at the heart of it is a girl who learns more about herself and others in death than maybe she ever did in life.

I will be honest with you. I had many chances over the years to read Lauren Oliver’s debut but there was something that always made me hesitant to pick it up. In lieu of the movie that was released not too long ago, I thought it was finally time to do it.

And frankly? I wasn’t disappointed. But at the same time, it was exactly what I thought it would be like and why I was always hesitant in reading it.

Sam Kingston is no nice girl. Not like Mean Girls where the protagonist just kinda fell into the machinations of the popular group but she thrived in this setting for so long. The way she acted towards those she deemed not part of her group, she didn’t think twice about laughing it up with her besties. Now, those girls were all sorts of messed up too. Lindsay’s your typical alpha, although the others seemed to have more say than other stereotypical cliques. Ally isn’t particularly bright but rich, and Elody just seems desperate with the boys. The book is broken down into 7 parts aka 7 repeats of Sam’s last day. The first day was dreadfully long, although I understood the necessity of setting the foundation of what the original day was like.

If the slow pacing wasn’t a killer to get through in the beginning, Sam’s attitude was just a huge turn-off. From wanting to just get it over with, she submits to her unworthy boyfriend Rob to lose her V card that night, to being completely rotten to sophomores and her childhood friend Kent who just wasn’t cool enough for her now. Honestly, I wanted to tell Sam to cut it out half the time.

As the story progresses, I will say that Sam’s character development does slowly change, and at a proper pace. She doesn’t miraculously decide to become an angel after the first time she re-woke on Valentine’s day again. It took looking at these different “days” from different perspectives to start to grasp just how little she really saw of her world. Her classmates’ lives weren’t as simple as she thought they were, or how absent she’d become in her own family. I really enjoyed that part.

It’s a good story when you start feeling for your characters. Even the horrid ones. Although Sam’s group of friends don’t technically change from each rewind, you still see beyond the stereotypical mean girl persona they put up. Each one has their own story and struggles that they hide behind their popular status at school. Everyone had their own fears. And at the heart of it all, Sam was trying to figure out how to move on (or was this how the afterlife should be?).

I will say the friendships and Sam’s strong narrative held the story. Each day and rewind got better. She became braver and less selfish (slightly). She started understanding what her actions led to, and how things should’ve been while she was alive. Even though it took a while, I couldn’t hate Sam even at the start. She wasn’t nice and she wasn’t someone I connected with at first, but I understood she was human and she had her own insecurities, though I’m not condoning how she put down others to lift herself up. I even understood why Sam couldn’t hate her friends after seeing what their summed up actions could lead to in others’ lives. That’s a marker of a true story that resonates with the audience. When you can’t even hate these two-dimensional fictional characters because they’re real enough to you, and you get that people make mistakes, albeit some worse than others.

The romance, if you can even quite call it that, was bittersweet. It’s a part of why I dreaded reading this novel. She finally got to the point where you know that she’s a better person ’cause of the days and moments that passed, but no one remembers it but her after each rewind. Her sweet moments with Kent were erased each time, and of course, she couldn’t stay like this forever. She couldn’t spend more time with her family, or truly find a love that would last. Her moments were now limited to just the one day, repeatedly. And hopefully, that wouldn’t be the sum of her afterlife.

Everything wraps up the way you would think it would/should. It’s as bittersweet as I predicted, but at the end of the day, I can see why it got so popular and won awards, even optioned for a movie. The beauty lay in Sam’s transformation and the everyday lessons she learned along the way. And at the heart of it, it was about friendship and family, and not knowing when that last day will be.

Overall Recommendation:
Before I Fall is everything as I imagined it would be ever since it first came out. Poignant and bittersweet, it follows Sam’s story as she navigates the last day of her life over and over again, picking up on the consequences of her actions and how things didn’t have to be the way it was if only she had made different choices and saw things differently. With a romance that doesn’t take away from the main story, ultimately we get to follow Sam’s journey as she tackles final moments with friends and family in order to move on. It’s a story that transverses the contemporary YA boundary and should resonate in some way with readers.

2 thoughts on “Review: Before I Fall by Lauren Oliver”