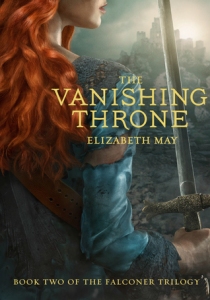 Everything she loved is gone.

Trapped. Aileana Kameron, the Falconer, disappeared through the fae portal she was trying to close forever. Now she wakes in an alien world of mirrors, magic, and deception—a prisoner of the evil fae Lonnrach, who has a desperate and deadly plan for his new captive.

Tortured. Time after agonizing time Lonnrach steals Aileana’s memories, searching for knowledge to save his world. Just when she’s about to lose all hope, Aileana is rescued by an unexpected ally and returns home, only to confront a terrifying truth. The city of Edinburgh is now an unrecognizable wasteland. And Aileana knows the devastation is all her fault.

Transformed. The few human survivors are living in an underground colony, in an uneasy truce with a remnant of the fae. It is a fragile alliance, but an even greater danger awaits: the human and fae worlds may disappear forever. Only Aileana can save both worlds, but in order to do so she must awaken her latent Falconer powers. And the price of doing so might be her life…

The Vanishing Throne was just as imaginative and epic as its predecessor, filled with character development and lush new settings and mysteries.

First off, can I just say that I’m so glad Aileana isn’t constantly harping on about revenge and what not in her mother’s killer in this book? It was a major turn-off in the first book as her bloodlust drove her to do irrational things and the descriptions of how it overtook her was just getting tiring.

That’s not to say that she doesn’t have things that happen to her in this book that wasn’t worthy of being mad about. It starts right off where we last left our hero. Trapped in some underground world with their number one enemy. Things pretty much stay level on the action department from there. I felt so bad for her as her strong spirit was slowly broken down and her physical body tormented in cruel ways. Fortunately, they don’t stay in this world for long in the book, which surprised me as I assumed this part of the story arc would last longer.

But of course, this allows more time for the other familiar characters from book 1 to appear. Derrick is such a sweet little thing, with a fiercely loyal spirit to Aileana and love for honey. We get to know more about him and his people in this story, including the weird history that he and Kieran share. Speaking of our resident bad boy, a TON of things about his past and who he was were answered, although many more questions popped up just as soon afterwards. He’s a lot softer than I remembered him being in the first novel, but I suppose feeling love towards another human could do that to you. The romance was unrushed, but at the same time, it felt a little lacking for me. I totally love this ship but my heart just wasn’t captivated by it so much in this book.

What disappointed me less was the overall story plot. After getting back to Scotland, things were so very unlike what they were in the first book. Time has passed (after all, fae time differs greatly from human time on Earth) and people Aileana knew had changed after facing horrendous events in the aftermath of the Wild Hunt in Edinburgh. While this completely different setting, and their new camp base, intrigued me, the action (aka battles) weren’t as suspenseful or mysterious as I anticipated. Don’t get me wrong, crazy things go down as their enemies close in on their surviving human base, and of course a certain few fae were really gunning for our girl Aileana. Some of the events that occurred just felt a bit predictable overall.

Although exciting things do happen with regards to this main story arc, no matter how predictable, I felt this book suffered a little. I can’t quite pinpoint how. It seemed to have the makings of everything I could want in a fantasy to make me quite happy, yet I felt my attention swerving to another book and it took a while to finish this book after a long break. This could’ve just been me and the exciting books I read prior to it, so don’t feel too disappointed yet with this sequel. That ending! Oh my goodness, it really sets things up for the next and last book. I’m pretty sure some big head-to-head is coming our way. So stay tuned and just get through this one. I’m sure it can be enjoyable for quite a few readers who loved The Falconer.

Overall Recommendation:
The Vanishing Throne continues with our brave heroine, Aileana, as she tackles one-on-one with a fearsome foe. Although there are plenty of scenes that should leave you breathless with anticipation and excitement, something just didn’t hit me right with this book. Maybe it was the pace which sometimes felt a little slow, or the romance that just didn’t seem to excite me as much as it should. But with plenty of imaginative additions to the fae lore and familiar secondary characters playing a different role in this book, I’d say this sequel should satisfy most fans even if it didn’t quite do the trick for me.

1 thought on “Review: The Vanishing Throne by Elizabeth May”