Series: From this Day Forward #1-2 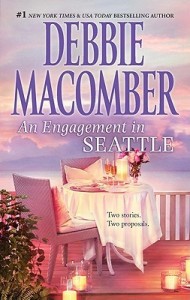 Aleksandr Berinksi is a Russian biochemist in the U.S. on a visa that is about to expire. Marriage will allow him to stay – marriage to Julia Conrad.
If Julia’s going to save her Seattle-based company, she needs him as much as he needs her. There’s a Groom Wanted in Julia’s life. And not just any groom!

A billboard on the side of a Seattle road is common enough – but one advertising for a bride? It’s Chase Goodwin’s solution to the problem of finding a wife quickly, a wife to bring home to Alaska.
Lesley Campbell has her own reasons for responding – and in no time she’s the Bride Wanted in Chase’s life!

Let me just first say that these two stories by Debbie Macomber are some of her older ones and seemingly different from the kinds of plots she writes more after the 2000s, but there’s still something about them that make it enjoyable and applicable no matter the audience (although I do suggest you’re at least 16+).

In Groom Wanted, there was a tangible chemistry between Julia and Alek. Although it was a marriage of inconvenience but one that would help save the company, Alek genuinely seemed to have very fond feelings for Julia even in the beginning. I’m glad that Macomber differentiated that his feelings weren’t equated to love, at least not initially, ’cause that’d be way too unrealistic.

Julia, on the other hand, made me wanna strangle her sometimes. Yes, she went through a horrible ordeal with the betrayal from the man she loved that kept her from trusting in Alek and his very true feelings for her. I suppose the fact that I didn’t give up when she drove me crazy a little is a mark of how invested I was into their story. Overall, it was a very easy read that I gobbled up in practically one sitting. Perfect for a summer day (or evening until the wee hours of morning…)

In Bride Wanted, Lesley’s story was harder to digest. She too had been used and left behind by a man, making her wary about men in general. Chase needed a woman to bring back to the far unknowns of Alaska, using the most amusing way to do that. I was more amused than anything when reading their story. Definitely not as invested, although there were sweet moments here and there as well.

Lesley’s insistent love for her ex was the most annoying trait. Chase wasn’t the most romantic kind of guy. He’s very straightforward (I think you can tell by his extremely direct method of finding a wife). So between the two of them, there was some chemistry but it wasn’t as fun to read when I just wanted to knock some sense into her and to tell him to maybe woo her a little more.

Overall Recommendation:
Both stories were overall cute and had its moments. These were situations where marriage was something they needed for their own reasons, but not because of love. As a hopeless dreamer myself, finding love after the fact is a wonderful storyline to watch unfold. Macomber executes the stories with heated passion that slowly builds and people who find that they did indeed marry for love after all. Groom Wanted was particularly enjoyable, while Bride Wanted wasn’t far behind but the individual personalities of the characters were a little harder to manage. Overall, it was a quick and nice summer read when you feel like a good romance that ends happily.