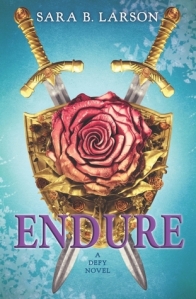 At last, Alexa and King Damian are engaged to be married. But their lives are far from safe. The kingdom of Antion is under siege, and Rylan is a prisoner of the enemy. Even worse, Alexa remains at the mercy of the evil Dansiian Rafe, who controls her mind and can force Alexa to kill or harm Damian at any moment. Despite this, Alexa is determined to rescue Rylan, which soon leads her far from Damian and deep into enemy territory.

When she arrives, what awaits her is deadlier than anything she could have ever imagined: an army of black sorcerers, and a horrifying plot to destroy the world as Alexa knows it. Will she be able to gather the strength to free herself, protect the love of her life, and save the land? Will there ever be true peace?

Acclaimed author Sara B. Larson has woven a stunning, romantic, and evocative finale to the Defy trilogy, that is sure to leave readers breathless until the very last page.

I have literally endured months for this novel to come out, and it doesn’t totally disappoint.

Endure picks up right from the top where we left off in Ignite with Rylan gone with the evil sorcerer Rafe and Alexa’s other friends a bit unnerved from the climactic events that had taken place at the palace. The action was on a furious high in this last installment, which I guess shouldn’t surprise me as it is supposed to be the ultimate conclusion. But for all you romance lovers out there, the cute, but albeit few and far between, romantic scenes between Alexa and her handsome king were definitely a highlight. The raw emotions between them really showed how strong their love was, to the point they were willing to let each other go into danger for the sake of the other.

I do believe my expectations were a little high due to the seemingly endless wait for this book. It was a fast and pleasant read. The evilness brewing in Dansii was every bit as creative as I had hoped, with plenty of grossly intriguing villains to hate. Alexa was her same strong self, the guard we’ve grown to love who could take down any man twice her size.

So….why can’t I give this a higher rating?

I guess Endure was missing something for me. It had action, and it had a little bit of romance thrown in there, but I guess I was hoping for some kind of fantastical twist that I would have never even dreamt of putting into the plot. Basically, this book reminded me of a story plot that even I had conjured up back in the good old days. It lacked a sort of pizazz if you will that would have greatly spiced it up to a 5 star rating. However, this could just be a me thing and should not be taken as a “I didn’t like it” sign.

Overall, Endure made for a lovely conclusion to a trilogy. The ending was sweet, but the whole story wasn’t all mushy-gushy. Sacrifices were made and not everyone survived. So it was a little bittersweet at the characters we had to say goodbye.

Overall Recommendation:
Endure was a cute little story filled to the brim with action against the unknown evils that were hiding in the kingdom of Dansii. Alexa Hollen, brilliant female guard, continues to shine in this concluding installment with her ability to stay alive no matter the crazy situations she’s thrown into. With bittersweet sacrifices and little intense romantic scenes with our favourite king, this novel mostly holds true to everything it promises, although may be lacking in the surprising twists department.