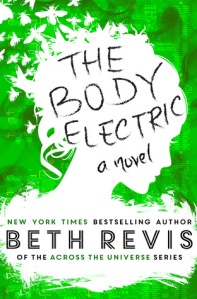 The future world is at peace.

Ella Shepherd has dedicated her life to using her unique gift—the ability to enter people’s dreams and memories using technology developed by her mother—to help others relive their happy memories.

But not all is at it seems.

Ella starts seeing impossible things—images of her dead father, warnings of who she cannot trust. Her government recruits her to spy on a rebel group, using her ability to experience—and influence—the memories of traitors. But the leader of the rebels claims they used to be in love—even though Ella’s never met him before in her life. Which can only mean one thing…

Ella’s gift is enough to overthrow a corrupt government or crush a growing rebel group. She is the key to stopping a war she didn’t even know was happening. But if someone else has been inside Ella’s head, she cannot trust her own memories, thoughts, or feelings.

So who can she trust?

The Body Electric has left me with amazingly conflicted feelings by the end of it. This is a story that follows a conspiracy that takes everything to a whole new, futuristic level set in the 22nd century. I liked Beth Revis’ Across the Universe trilogy and was excited to see another standalone book from her. I love the fact that the science fiction doesn’t go all techy and hard to follow. It enhances the experience of this futuristic setting but doesn’t take centre stage and grabs all the attention away from the central plot. For the most part.

But, for the first two-thirds of the book, I was half driven insane by our dear, dear protagonist, Ella. Sometimes I complain about protagonists who are just SO special that only they can save the world. As if no one else is capable of doing the same thing ’cause they just don’t have that intrinsic ability in them.

This girl? Ella Shepherd? She’s just plain boring and tiresome to follow. Ok, so she may not be entirely unspecial, as she plays an interesting role in the story, but she definitely lacks something.

And that something is courage.

She wavers ALL the time about not starting another war. Not trusting Jack, the guy she supposedly loved but couldn’t remember. Not wanting blood on her hands. She tries my patience to the very extreme. She’s weak and clearly not cut out of the same fabric as heroes with “saving the world” as their destinies. She leads trouble to the very group of people who may be the only thing standing in the way against the government. She’s the liability. And even she knows this.

“My nanobot count, the tracker bots that were inside of me, my abilities…I don’t know if I can’t be trusted because of what I am or because Jack doubts what side I’m on, but at the end of the day — I’m a liability.”

Even when it’s clear the government isn’t what they appear to be, she’s willing to set Jack up for them on a golden platter all like “Oh hey, maybe I can trick some details out of him to give to the person RULING this entire world”. You’re damn right she’s not special. She’s downright cowardly. And I absolutely DETEST following a character like that.

That’s not to say Jack doesn’t annoy me either, with his devil-may-care kinda attitude. His many flippant remarks about just “how devilishly handsome he is” makes me wanna slap him whether or not he was serious or joking. The time and place for those comments weren’t ever appropriate in the context of the situation. I couldn’t take him seriously saying those things.

But for a love interest, for a girl like Ella, he could’ve done SO much better than her. For the most part, he was at least courageous and believed strongly in his cause for fixing up the government’s mistakes. Looking out for the people the government has forgotten. And if his only flaw was calling Ella “love”, then he’s the best thing that’s ever happened to her. Too bad she couldn’t see that and just acted like some petulant child.

“Jack looks up and notices my nervous face. “I don’t bite, love.”
I whip around. “I told you to quit calling me that. I don’t care what kind of person I am in your memory. Because I’m not that person now.”

Clearly, she’s not the easiest person to be around. To be fair, she did have her memory wiped of him, but still.

Anyway, if you can stick it to the last 1/3 of The Body Electric, it does get a little exciting. I could never quite figure out where Revis was going with the plot, or how this whole conspiracy thing was going to end.

I don’t want to ruin anything, but I will say this. It confused the crap out of me. Like, seeing as Revis’ inspiration for “reveries” and Ella’s ability to slip into other people’s dreamscapes was based on Total Recall (if you know what that is), it was hard to determine what was reality or not in the end. However, the overall conclusion was satisfactory and didn’t leave any loose ends hanging. Although the romance never really quite hit it for me, even after Ella started falling for Jack again.

Overall, it really makes one think. With the way science and technology is going, what would the difference really be between an Artificial Intelligent cybernetic android and a human?

A soul, maybe? That’s something to think about.

Overall Recommendation:
The Body Electric presented a really unique futuristic setting on Earth with technology that was believable and concerns that seem quite real with how governments and people would use such technology. If it hadn’t been for a heroine that just seemed more like a liability than a, well, hero, for most of the story, I think I would’ve rated this a lot higher. Unfortunately, Ella doesn’t really mold into her own until far too late, but if the central conspiracy theme has hooked you in from the start, I’d say this novel can still be saved by its very reflective (and slightly confusing) ending.