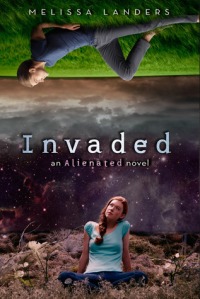 The romantic sequel to Alienated takes long-distance relationships to a new level as Cara and Aelyx long for each other from opposite ends of the universe…until a threat to both their worlds reunites them.

Cara always knew life on planet L’eihr would be an adjustment. With Aelyx, her L’eihr boyfriend, back on Earth, working to mend the broken alliance between their two planets, Cara is left to fend for herself at a new school, surrounded by hostile alien clones. Even the weird dorm pet hates her.

Things look up when Cara is appointed as human representative to a panel preparing for a human colony on L’eihr. A society melding their two cultures is a place where Cara and Aelyx could one day make a life together. But with L’eihr leaders balking at granting even the most basic freedoms, Cara begins to wonder if she could ever be happy on this planet, even with Aelyx by her side.

Meanwhile, on Earth, Aelyx, finds himself thrown into a full-scale PR campaign to improve human-L’eihr relations. Humans don’t know that their very survival depends on this alliance: only Aelyx’s people have the technology to fix the deadly contamination in the global water supply that human governments are hiding. Yet despite their upper hand, the leaders of his world suddenly seem desperate to get humans on their side, and hardly bat an eye at extremists’ multiple attempts on Aelyx’s life.

The Way clearly needs humans’ help . . . but with what? And what will they ask for in return?

Alternating between the events happening in Cara and Aelyx’s life, this sequel to Alienated surprisingly held its own.

Although some fans may be saddened that Aelyx and Cara are physically apart for quite a lot of the book, I found that kind of refreshing. It’s not like they didn’t contact each other on their com-spheres (this alien world version of a cell phone I’m guessing). There’s still “romance” going on, but it’s not the main highlight this time around.

So what was Invaded about then?

In Cara’s half of the story, she was faced with learning the cultures and ways of a life over with the L’eihrs. I found it quite interesting to see how these aliens ruled and lived by. There was definitely plenty of intrigue when it came to the aliens’ obvious despise for her presence among them, escalating quickly when it became clear someone was trying to frame her for things she did not do.

Over on Aelyx’s side, Earth was not that much better for him. After the events of the previous novel, let’s just say the Earthlings do not trust him very much. Attempts were made on his life, and the motive and culprit behind these acts were not always predictable. Okay, well, it was a little predictable with one of the twists in the plot, but I was in denial through half of the book hoping it wouldn’t go there.

Sadly, I was wrong but it did make the story more interesting and unpredictable…

Either way, Aelyx and Cara both had busy plotlines and I enjoyed reading them both even though they weren’t together. My only complaint is the resolution for Cara’s problems which I felt were rushed in places that could have been prolonged in order to add suspense instead of just making me say Oh, they found out what happened already?. All in all, not a bad read and definitely entertaining. It never suffered too much drag as I think Landers is unsure of whether this book will be the last or not. It most definitely can continue with a very delicious tidbit of knowledge that was placed near the end, but I guess time will tell whether or not a third book will become a reality.

Overall Recommendation:
Invaded held intriguing plot twists for both Cara and Aelyx’s stories as they each deal with living on the others’ planet. Cara is off adventuring to the unknown of living with the L’eihrs while Aelyx is trying to – well – not be killed by the people that hate him. Although romance was not heavily pressed upon, the story still had its sweet moments but it most definitely centres on working out the differences between the two species. With an ending that can potentially spin out into a third book, Invaded was a nice sequel and laid out a foundation for hopefully another one.