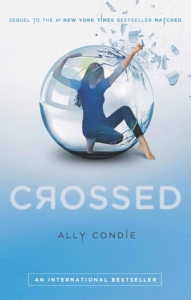 The Society chooses everything.

The books you read.
The music you listen to.
The person you love.

Yet for Cassia the rules have changed. Ky has been taken and she will sacrifice everything to find him.

And when Cassia discovers Ky has escaped to the wild frontiers beyond the Society there is hope.

But on the edge of society nothing is as it seems…

A rebellion is rising

Chasing down an uncertain future, Cassia makes her way to the Outer Provinces in pursuit of Ky–taken by Society to his certain death–only to find that he has escaped into the majestic, but treacherous, canyons.  On this wild frontier are glimmers of a different life . . . and the enthralling promise of rebellion. But even as Cassia sacrifices everything to reunite with Ky, ingenious surprises from Xander may change the game.  On the edge of Society, nothing is as expected, and crosses and double crosses make Cassia’s path more twisted than ever.

After having read Matched not all that long ago, I can’t say I was absolutely dying to read its sequel. And although this book was by far not any better than its predecessor, it wasn’t as terrible as it could have been.

My first concern was that it would be a truly boring tale. And it could have very much been just that. Extremely boring. Yes, Cassia comes across certain hardships on her road in chasing down Ky in the Outer Provinces where he was sent at the end of Matched. But were they necessarily exciting? Or just realistic challenges that she probably had to face trekking through these barren lands that no one’s really been living on in a while.

What made it bearable was Ky’s point of view. It kept the pace feeling less like it was dragging on and on because it switched to what he was doing and facing rather quickly, giving an air of illusion that the pace was quicker than it honestly was, when I look back on it.

I’ll be honest with you. The romance was not too heavy in this book either. Sure, Cassia is going after Ky because of her love for him, yet I still feel like she could turn towards Xander at any point. I’m not exactly against that. He’s a great guy too, a rather strange stance as I normally am on some “team” or other. But seeing the world through Ky’s eyes was a smart move on Condie’s part because it made me understand and possibly even like Ky more. He felt kind of distant and surreal in the first book to me. Like I couldn’t understand why he loved Cassia, and only glimpsed who he was through the strips of his life story that he gave her to read. He sounded like a nice guy who went through a ton of hardships at such an early point in life, but did I really understand him all that much? Nah, not really.

Plus, honestly? I think I like Ky’s narrative voice better than Cassia’s. Sometimes I find her a little naive, like she doesn’t really understand the scope of the world outside the Society’s imprint on her life.

To keep this review short, Crossed can at best be described as a mediocre book that somewhat carries the plot further. Imagine it as the line that connects the first dot (aka Matched) to a second dot (aka the third book Reached). It helps to understand how one thing connected to the other, but I don’t think it was absolutely amazing or anything.

It could be just Condie’s writing. You can tell she taught and loved English. Her writing style is somewhat poetic and descriptive in that sense. Chapters can be occasionally very short and scenes easily and rather abruptly change from one to another. It’s not my particular cup of tea, but it’s not to say it wasn’t nice at times. Just…not for the whole length of the book.

Overall Recommendation:
Cassia has embarked on her journey to the Outer Provinces to find her beloved Ky, although her heart seems to have the potential to still love another. With a pace that’s deceptively decent due to the alternating POVs between Ky and Cassia, Crossed introduces life outside of the Society and its control of the people trying to survive there. The plot may further the storyline, but besides giving us an amazing glimpse into Ky and who he is, it doesn’t do much more besides make us wait for whatever conclusion Condie is setting up for in the final book.