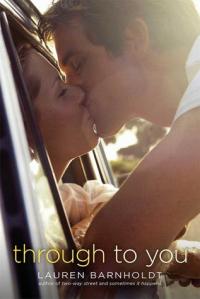 Opposites attract—and then complicate—in this romantic, relatable novel from the author of Two-Way Street and Sometimes It Happens.

It starts with a scribbled note in class: I like your sparkle. Harper had casually threaded a piece of blue and silver tinsel through her ponytail in honor of school spirit day. And that carefree, corny gesture is what grabs Penn Mattingly’s eye. Penn—resident heartbreaker of the senior class. Reliably unreliable. Trouble with a capital “T.” And okay, smolderingly sexy.

Harper’s surprised by Penn’s attention—and so is Penn. The last thing he needs is a girlfriend. Or even a friend-with-benefits. The note is not supposed to lead to anything.

Oh, but it does. They hang out. They have fun. They talk. They make out. And after a while, it seems like they just click. But Penn and Harper have very different ideas about what relationships look like, in no small part because of their very different family backgrounds. Of course they could talk about these differences—if Penn knew how to talk about feelings.

Harper and Penn understand their attraction is illogical, yet something keeps pulling them together. It’s like a crazy roller coaster—exhilarating, terrifying, and amazing all at once. And neither knows how to stop the ride…

Through to You was meh. I never had really high expectations for it, having never read any Lauren Barnholdt books before, but I was in the mood for a fun read that wouldn’t rile me up too much.

Alternating between POVs of both Penn and Harper, it started off kinda fun as I’d initially hoped. Harper’s your typical shy, never been really noticed by anyone in her school type of gal. Penn is your stereotypical bad boy who doesn’t do relationships. I didn’t mind that. They were an interesting pairing and it amused me. At first.

But that lasted all about till maybe halfway through the book. Mind you, the book isn’t all that long either so it was rather quick that I became so annoyed. Penn has family problems. That’s made quite obvious and explicit rather early on in the story. But this book isn’t one of those that deals in character growth and development when it comes to having tough family lives. No, it’s nothing like that. It’s just an excuse for Penn to act all moody the way he is.

I swear, he’s like hot and cold; one minute he’s happy and grabbing Harper to hang with him, the next he’s moody as crap and giving everyone the silent treatment. For WEEKS ON END. It’s not only because of his family problems that sets him off. That’s just why he keeps relationships at arm’s length. The REAL problem lies in the fact that he hurt his shoulder and can’t play baseball anymore. Okay, I get that that would really suck for someone who was relying on the sport for a way to make a future living, but my goodness, he’s downright acting like a sulky five-year-old.

Why is that? He blames EVERYONE for what happened to him. He’s just given up for any way to heal his shoulder, getting mad at anyone who tries to give him the slightest bit of hope. I wanted to poke him every time his POV came up. Urgh.

Aside from Penn, Through to You was mediocre in a genre that is FILLED with stories with similar premises. The ending was also rather abrupt in my opinion. If not giving the time for the characters to grow up a little from the immature actions they dealt out in the story (AHEM PENN), then at least follow through with the relationship between Penn and Harper. The plot really seemed like pieces were thrown back together in a haste to conclude everything. It also wouldn’t have hurt to make the relationship seem more plausible either. Like come on! Just because they both couldn’t “get the other out of their heads” does NOT a relationship make. Pfft, not enough chemistry. That’s important in my books.

I don’t know if I’d read other Lauren Barnholdt books, but even with lowered expectations, it just didn’t stand out amongst a very populated genre.

Overall Recommendation:
Through to You had its flaws. Penn was an insufferably immature character who threw temper tantrums and had such terrible mood swings for no good reason. What could have been an interesting story about learning to deal with the problems life swings at you turned out to be a mediocre story about a boy who for some reason (still unknown to me) eventually let a girl into his life and things just somewhat got better from there. The relationship aspect wasn’t the strongest, and Harper’s voice wasn’t unique enough to be remembered after finishing the book. In a genre full of stories such as this, sadly, Through to You landed squarely in the barely memorable category.