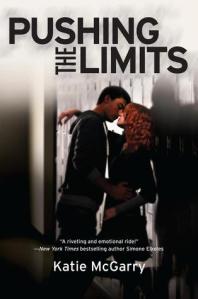 So wrong for each other …and yet so right.

No one knows what happened the night Echo Emerson went from popular girl with jock boyfriend to gossiped-about outsider with “freaky” scars on her arms. Even Echo can’t remember the whole truth of that horrible night. All she knows is that she wants everything to go back to normal.

But when Noah Hutchins, the smoking-hot, girl-using loner in the black leather jacket, explodes into her life with his tough attitude and surprising understanding, Echo’s world shifts in ways she could never have imagined. They should have nothing in common. And with the secrets they both keep, being together is pretty much impossible.

Yet the crazy attraction between them refuses to go away. And Echo has to ask herself just how far they can push the limits and what she’ll risk for the one guy who might teach her how to love again.

I’ve been putting off this book for the longest time, for no particular reason really. However, diving into Echo and Noah’s lives, I realized that Katie McGarry is a genius when it comes to character building. Having never experienced anything remarkably similar to what our two protagonists have gone through, it’s an amazing feat to really feel what they do and understand (with patience, sometimes) their reactions.

For example, my heart tore for Echo when it came to her family. Feeling always second to her stepmother-slash-nanny and having an extremely controlling father, it’s no wonder she feels like a mess for most of the book, besides her scars, of course. As for Noah, he has a mouth of a sailor and a mischievously dirty mind, but it adds to his realistic personality. Not every story has the golden boy or Prince Charming featured as the male protagonist. I liked that he was who he was, molded by his experiences, but still able to change from love.

Their characters are so real, with moments that would make you laugh at how they would respond or think about a certain situation. For example, in a situation with her controlling father, in Echo’s POV:

“Are you ready to take the ACT on Saturday?” my father asked.
Did chickens enjoy being put on trucks labelled KFC? “Sure.”

And Noah can be so endearing. For a bad boy with a reputation that walks out the door before him, it makes his moments falling for Echo that much more enjoyable. Plus, what girl doesn’t love being the one and only that makes a player become a faithfully attached guy?

“Not sure how I felt about Antonio and Echo, I linked my fingers with hers. Antonio cocked a surprised eyebrow. Damn straight, bro. I did just mark my territory.”

With his backstory, a previous golden boy that fell into the foster care system after his parents died, he was constantly fighting to get his 2 younger brothers back. Seeing his pain and knowing at the end of his story that he could release it for the first time was heartbreaking in itself. Of course, it’s still a little humorous the way McGarry puts it.

Let’s just say, this is a book to try. I’m not saying it’s for everyone, as there are heavy things the characters deal with. But it’s most definitely worth a shot!

Overall Recommendation:
Pushing the Limits was an emotional story that takes you on a ride with our two strong protagonists, Echo and Noah. With beautifully crafted personalities and amazing secondary characters, Katie McGarry draws you into their world and the problems they have to deal with. I recommend it for mature readers who want to read the heavier stuff sometimes and not just the fluffy, chick-lit sort of romance. Give it a shot! It may just be the best book ever.